The island of Cyprus is located in the Mediterranean Sea south of the Turkish coast of Alanya, at the same latitude as Syria. But the climate on the island is much milder. Affected by the surrounding by the sea from all sides, and the presence of a mountain range crossing the island from north to south. Of course, it's hot, but not so hot that it was impossible to go outside during the day.
Holidays in Cyprus, despite the proximity of Turkey, are still built more on the European model than on the Turkish-Egyptian model. In the sense that there are very few all-inclusive hotels in Cyprus, and in those that exist, prices are much higher than in Turkey.

The air temperature in Cyprus, even in winter, almost never drops below +10 degrees, and the sea below +15. That is, theoretically, you can swim all year, although, of course, not everyone dares to do it. In general, the beach season lasts from late May to the end of October, sometimes the sea can be warm in April and November. 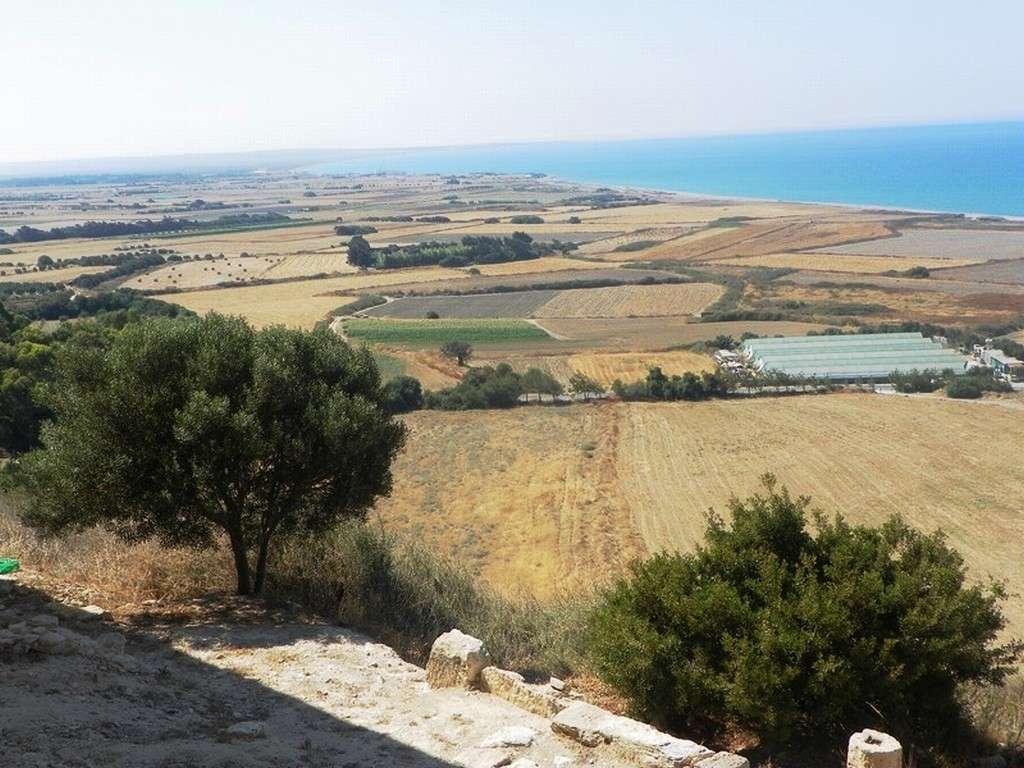 Politically, the island is divided into the Republic of Cyprus and the so-called Turkish Republic of Northern Cyprus. Cypriots (as, indeed, all other countries of the world, except Turkey) do not recognize it and consider it a Turkish occupation. In fact, everything is far from simple.
Under the treaty establishing the Republic of Cyprus in 1960, equal rights were guaranteed for the Greek and Turkish communities, which was not observed in practice. Turkey in 1974 brought troops into the northern part of the island under the pretext of protecting Muslims. Considering that Greece was in power at that time, the so-called. "black colonels", with the main slogan "Greece for Greek Christians" (and they did not separate Cyprus from Greece), the Turks' concern for the fate of their co-religionists cannot be called groundless. Moreover, Turkish troops landed on the island only after a military coup took place in Cyprus with the support of "black colonels" and supporters of annexation to Greece came to power. But, in spite of all the "buts", of course, this is exactly the occupation.
As a result, now almost exclusively Greeks live on the south side of the island, and Turks live on the north. Since there were not enough local Turks for the whole land, Turkey is actively using various baits to resettle residents from the mainland. By the way, as they say, the Cypriot Turks are quite different from their fellow tribesmen, incl. even outwardly.
Naturally, there are no diplomatic relations between Cyprus and Turkey. There may be problems with entry (and into Greece too) if you have a stamp of the Republic of Northern Cyprus in your passport. Such an excursion is offered at the resorts of Alanya-Antalya, and it is not a problem to get there from Greek Cyprus. In general, the chance for this is small, since, for obvious reasons, the Turks do not want to create problems for tourists, and everyone who wants to can put a stamp instead of a passport in a specially filled sheet.
What, after all these events, the relationship between the Turks and Cypriots is easy to imagine. And these huge flags of Turkey and the Turkish Republic of Northern Cyprus on the side of the mountain, perfectly visible from the Greek part of Nicosia, indicate that they are unlikely to improve anytime soon. 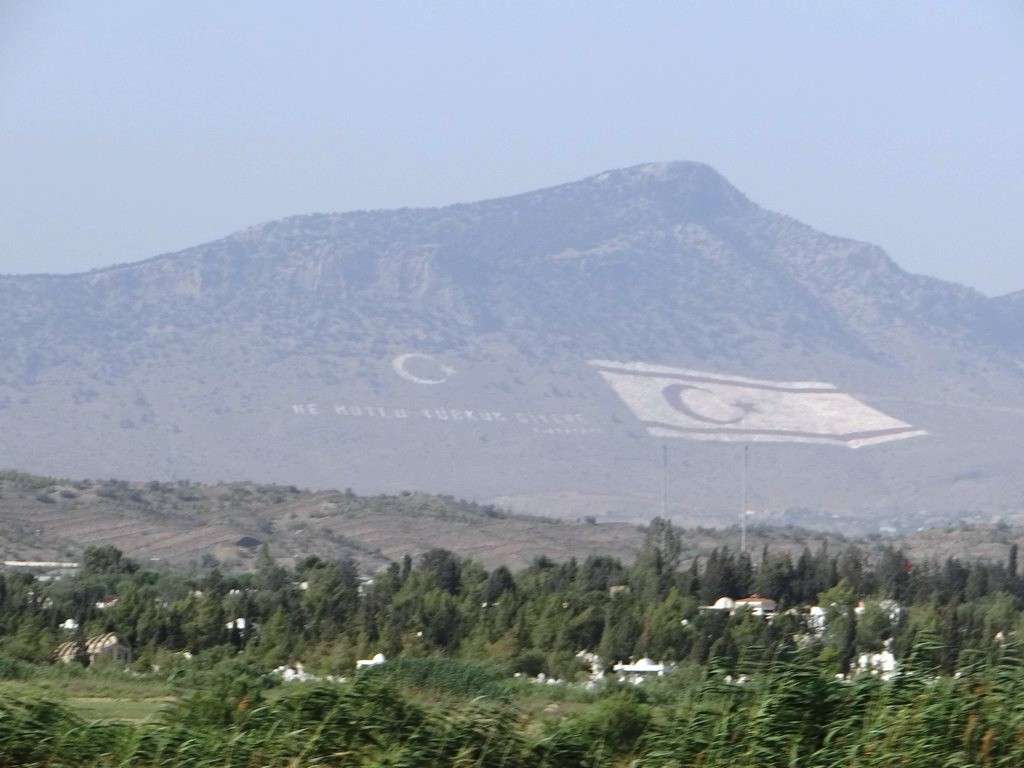 How to get to Cyprus

For lovers of unconventional routes, there is an option to get by sea. From the coastal Turkish cities, it may not even be too long and not extremely expensive - from 2 hours and 20 euro, if we are talking about the nearest ports - Tashuku and Mersin. From Alanya it will be two to three times longer and as much more expensive. Ferries arrive, naturally, on the Turkish side - in Kyrenia. From the point of view of the Cypriot authorities, this is an illegal way to enter the island, therefore you will not be allowed through the demarcation line. Moreover, in the future there may be problems with visiting Cyprus and Greece.
You can get to the Greek part of the island by sea only with cruise ships from some Mediterranean country, which, as you might guess, is not fast and expensive.

Cyprus resorts - what to choose

Remaining from the Greek and Roman civilizations - most often, unfortunately, ruins. Well preserved, perhaps the mosaics.
Of the later sights, several monasteries in the mountains and many churches have survived. In general, in any resort town (of which there are only three - Limassol, Larnaca and Paphos) there are plenty of attractions. Moreover, you can, if you wish, walk to almost any attraction, except for Limassol, where the population is about 100 thousand people - and this is the largest city in the country. In Larnaca there are half as many people, in Paphos four times less.
And the island itself is about 240 x 100 km in size. (including the Turkish part), so in a couple of weeks you can go around it up and down.
Familiar in Europe, the so-called old towns there are no in Cyprus. Almost everywhere, the city center is an unremarkable modern building. Buildings of the late 19th century are very rare. The oldest fully preserved streets are no older than the beginning of the 20th century.

Using public transport in Cyprus is not always easy. It is represented by buses and taxis.
The interval of movement of intercity buses is long, and sometimes unreasonably large. More than once I observed a situation when at the bus stop people could not fit into the desired bus and remained for another hour, wait for the next one (this, of course, is not about city buses - there are no such problems). Moreover, it is not always clear what to expect, since the schedule on the official website of Cypriot transport (in general, very convenient) does not always correspond to reality, and you can only check at the final stops (where, of course, the departure from other points is not indicated)... So, leaving the water park, we went to the bus stop, but the bus did not appear. They began to wait for the next one, which was scheduled in an hour, but after half an hour the bus arrived. What kind of bus it was and why it ended up there at an incomprehensible time remained a mystery. When I was leaving the village of Kiti, the bus cheerfully dusty past me on the other side of the street at the right time :) Apparently, it turned around somewhere and drove back, but not along this road. I quickly went to another street to the next bus, but I did not find any stop there at all. There was a hope that the bus would come, but no, it didn’t come. And only on the next flight, again on another street, I managed to leave. In total, I lost about an hour.
And also, if the stops are on the same street, then they are all named the same. For example, driving along a long avenue - the "Archbishop Makarios" stop. Next stop is "Archbishop Makarios". And all the next ones too :) So choose where you need to.
In short, entertainment is not for the faint of heart.

Peculiarities of holidays in Cyprus

The official languages of Cyprus are Greek, Turkish and English.
It is very difficult to understand what is written in Greek letters. Not only are the letters strange and there are many that are not familiar to us at all, but also familiar letters sometimes sound in the most unexpected way, depending on their combination. Considering that there are almost no understandable words, it is very difficult to read what is written..
Communication is easier - almost everyone speaks English.

There are many cats in Cyprus. So many that they are considered one of the symbols of the island. Most of some special local breed - skinny, with long legs and tails. 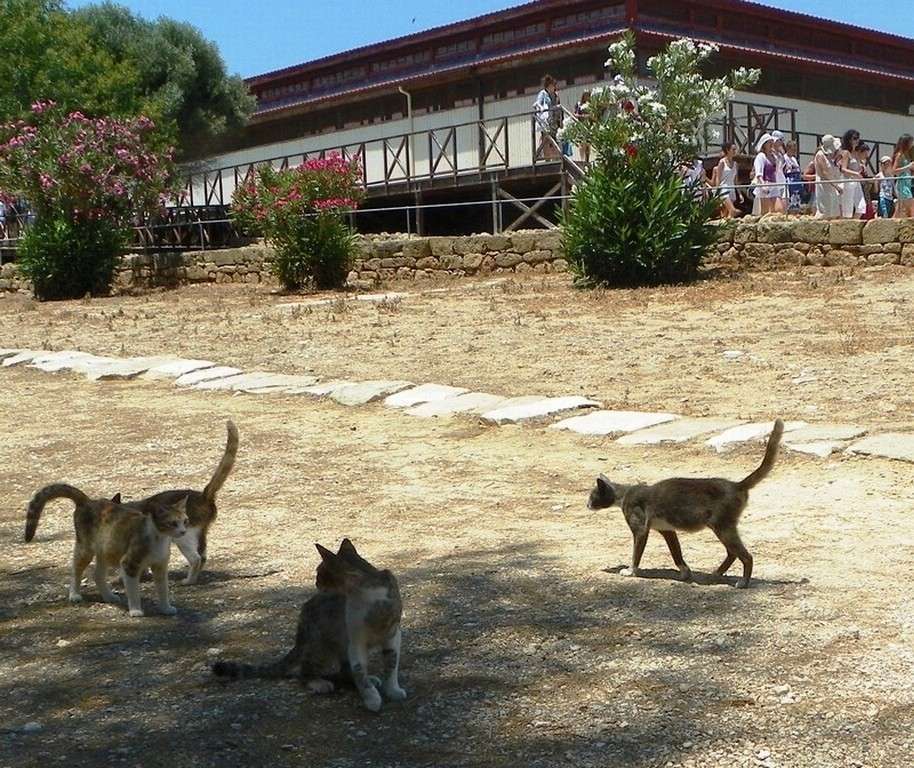 Cyprus differs from mainland Greece in that it gained independence quite late (in 1960), freeing itself from British rule. Nevertheless, even now, there are several British military bases on the island. And in general, much is left of the British. By the way, even some products are still brought from England, although it would seem that where is England and where is Cyprus... And, of course, there is left-hand traffic in Cyprus. However, you quickly get used to this, especially since the separator between the lanes on Cypriot roads is most often not markings, but some serious obstacle, such as a side or green spaces. And also, from the British there are "wrong" sockets, therefore, the first thing upon arrival is to attend to the purchase of adapters. I advise you to take your time and find the nearest supermarket - there this necessary item (as well as everything else) can be bought much cheaper than in small shops.
There are many expensive cars on the roads. Even taxis are entirely executive class Mercedes.
The products are expensive. In principle, this is understandable, is the island, and the products are mostly imported. Delivery by sea or air only. Judging by the prices, almost the only thing that is produced in Cyprus is wine and oranges. Both are delicious. 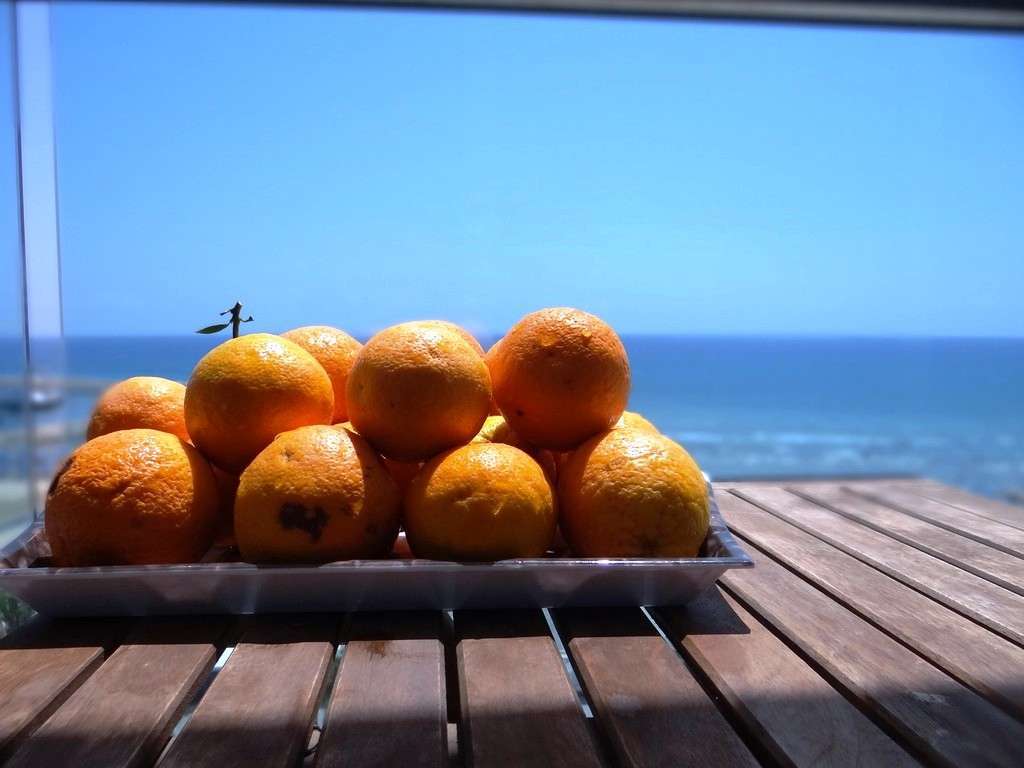 Lots of Greek wine, also inexpensive. Not bad, despite the crookedly pasted labels, brandy "Five Kings". When describing the sights of Cyprus, the wine "Commandaria" is necessarily mentioned. For my taste, this is something terrible. A very sweet strong drink. Moreover, it is just not cheap, from 10 euros to infinity.

Interestingly, there are a lot of national food stores. 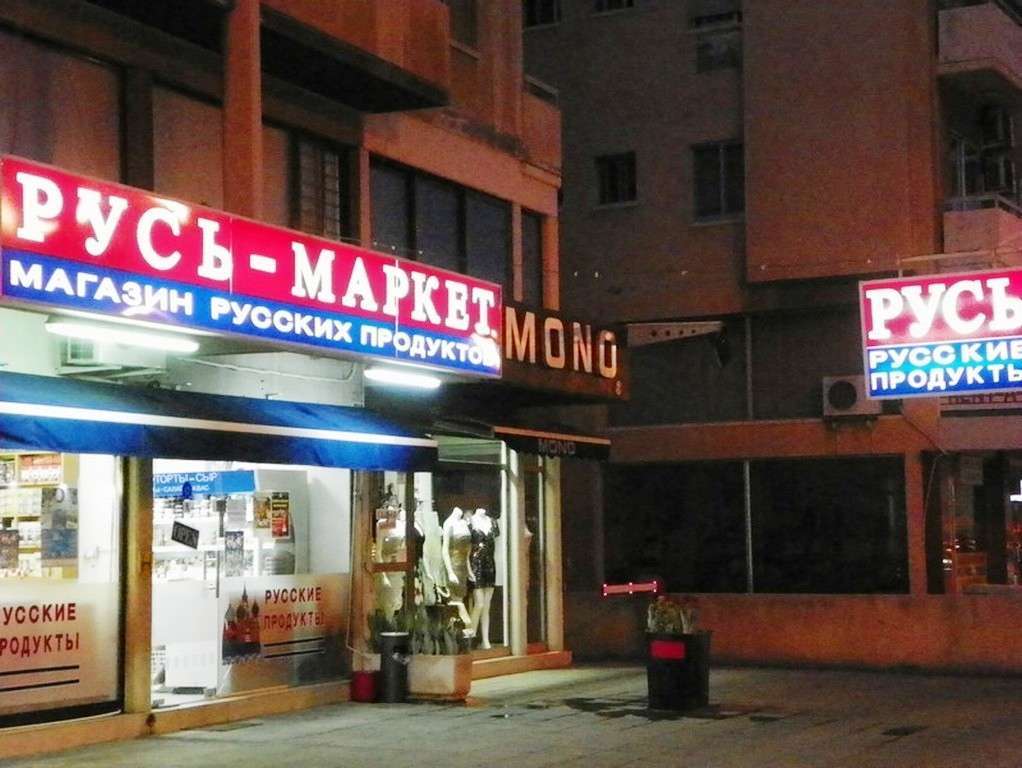 Russian shops are no longer a rarity, but I also saw Polish, Romanian, Bulgarian... And, even in ordinary stores they sell products from Russia, such as stew or buckwheat, apparently for nostalgic Russians. :)

A few words about the Cypriot customs directly related to tourists.
First, the hotel pools are open to local residents (maybe five-star hotels don't have this - I don't know). That is, not that they come and it is not forbidden for them, but, on the contrary, the more they come, the better it is for the hotel - they drink and eat in specially arranged cafes. As a result, the pool and its surroundings are almost always filled to capacity with people.
Secondly, since the pools are the center of entertainment, then weddings are arranged right there. Therefore, if your windows face the pool, every Saturday you will be guaranteed to enjoy a Cypriot wedding. 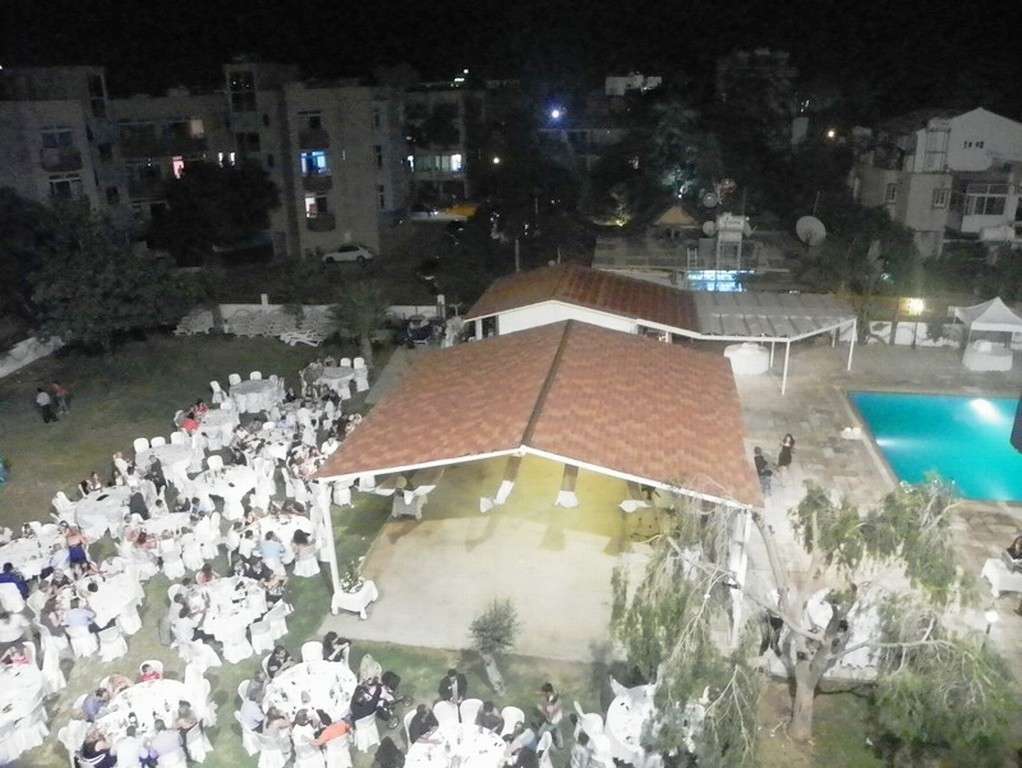 In principle, the first time is even interesting. The music is mostly local, and the dances are generally exclusively national. From alcohol on the tables, they put mainly beer, and those guests who wanted something else brought bottles with them.
But, despite such a peaceful nature, all this continues until three or four in the morning, and if you suddenly want to see dreams instead of a Cypriot wedding, it will be a problem. Because, no matter how quiet the music is - when it happens directly under the windows, you can hear everything wonderful.

And finally, there are also Cypriot cats. :) 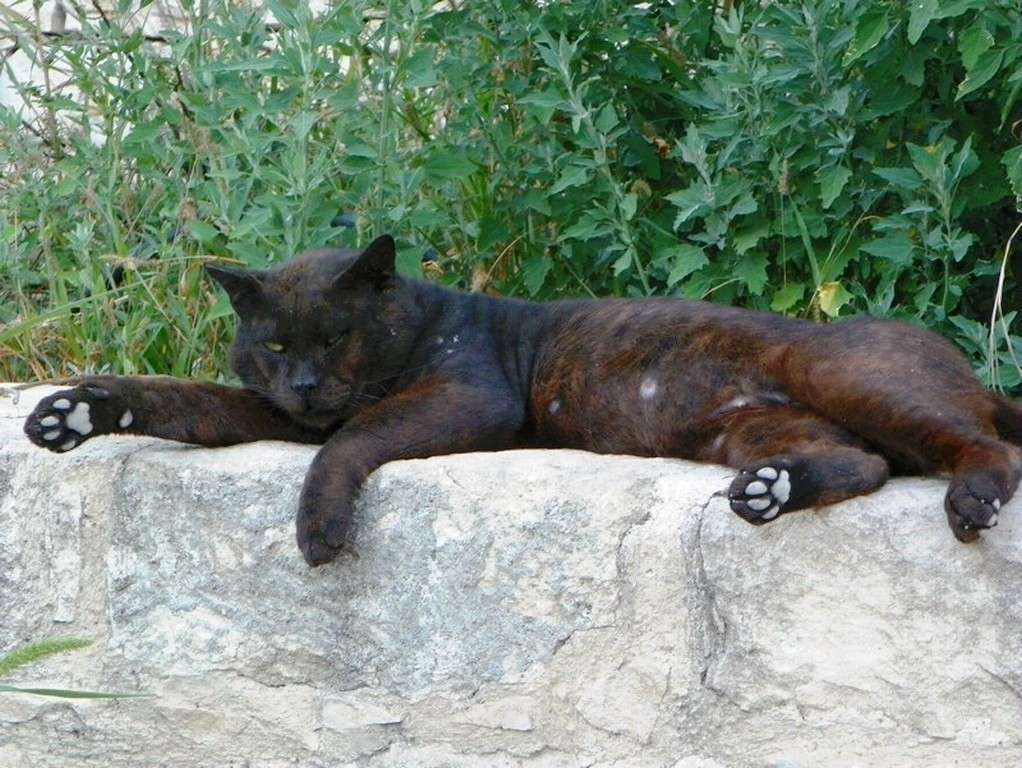 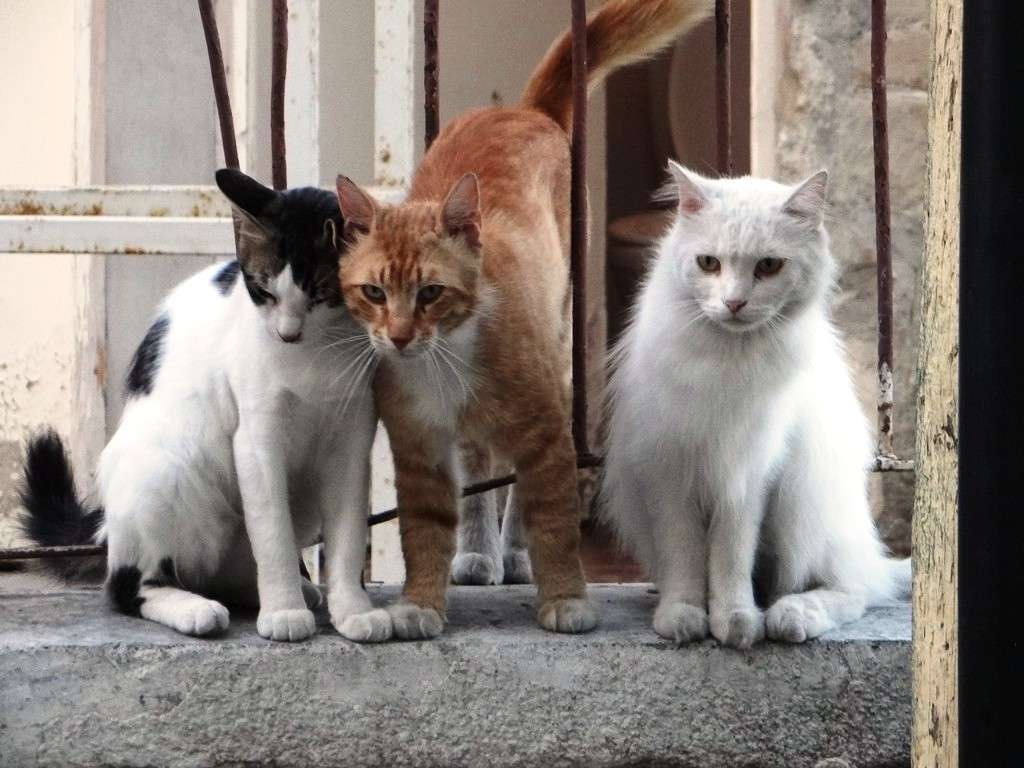