Limassol (Lemesos) is a city on the southern coast of Cyprus, the second largest on the island (240 thousand inhabitants).
Limassol is located on the shores of the Akrotiri Bay between the ancient cities of Kourion and Amathus, which is why the Byzantines called it Neapolis ("new city"). A tourist-resort area stretches from Amathus to the center of modern Limassol along the waterfront.

There is no airport in the city, you need to go from Paphos or Larnaca, it is about 70 km. In either case, you can use the Limassol Airport Express bus, the journey will take about an hour, the cost is 9 euros. For bus schedules and other information, visit the Cyprus Bus website.
The same taxi trip will cost about 50 euros. 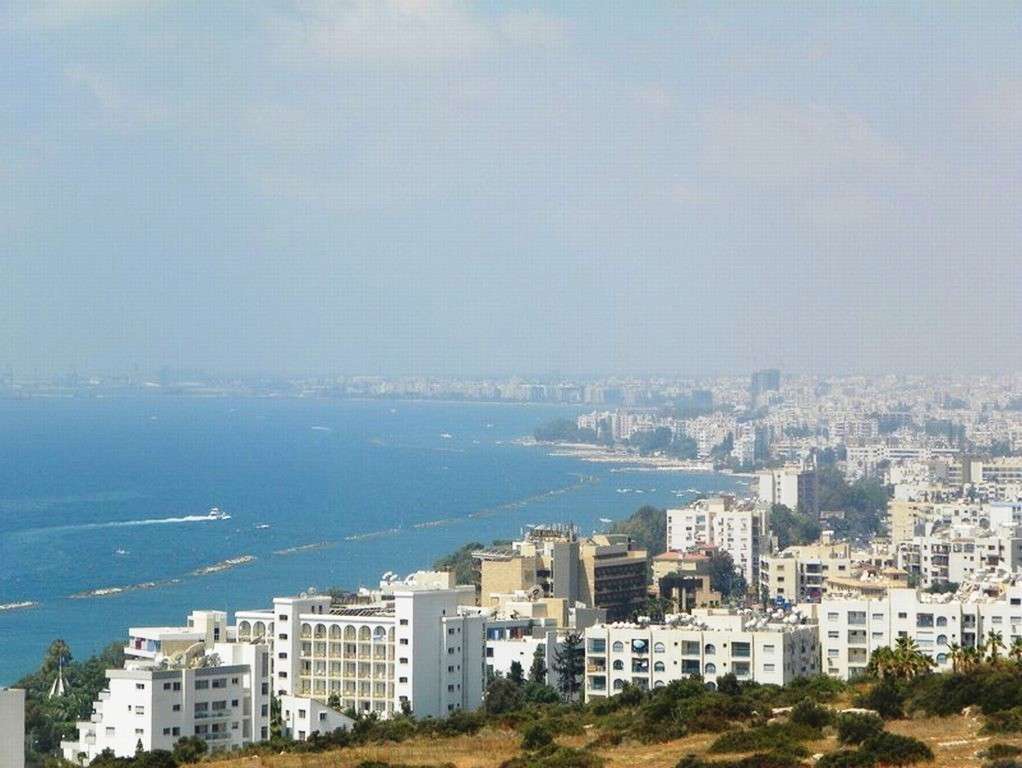 Bus number 30 runs along the entire coast of Limassol, it's very convenient.
There are quite a few large supermarkets in Limassol, I think, wherever you live, it will not be difficult to find the nearest one.
There is a port on the western outskirts of the city, next to a very large souvenir shop. Here begins, as it were, the old city, although from the old there is only a fortress.

The Limassol fortress is very small, rather a fort, and built up around to such an extent that it is even impossible to photograph it in its entirety. 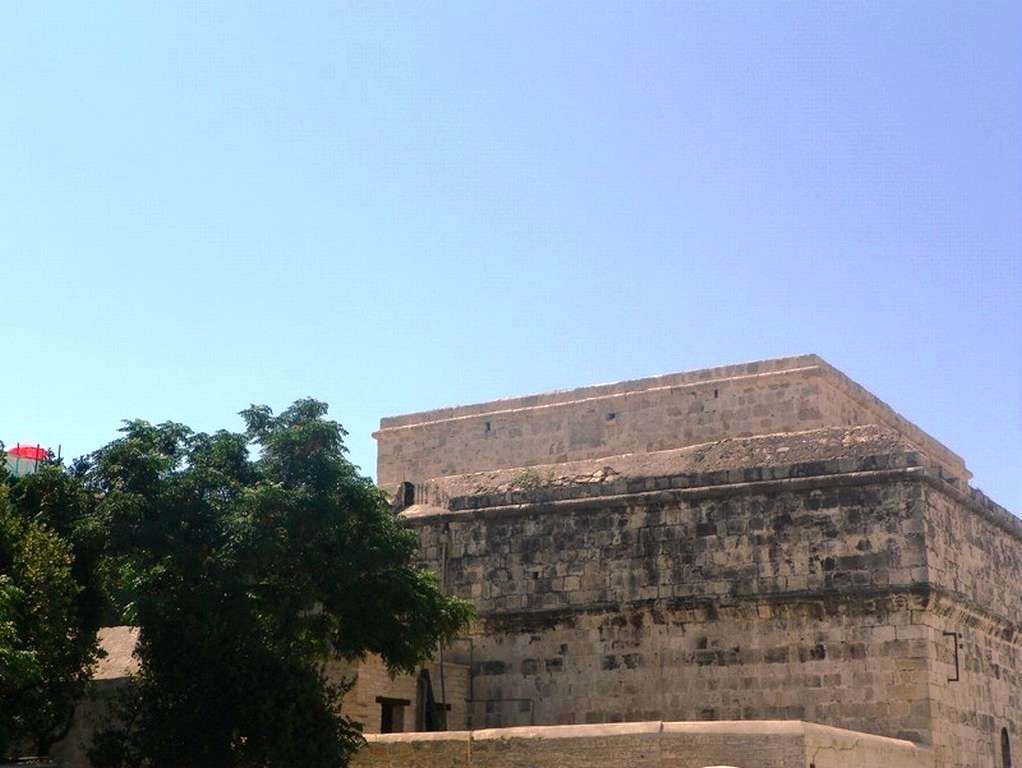 Inside the fortress is museum, there is nothing particularly interesting there. You can climb to the roof and survey the surroundings, but, again, there is nothing worthy of attention around.
In general, the center of Limassol consists of not old, but already, for the most part, quite dilapidated buildings. The local authorities, apparently, are aware of how much it harms the image of the city, therefore, at the time of our stay in Limassol, the center was a large construction site. 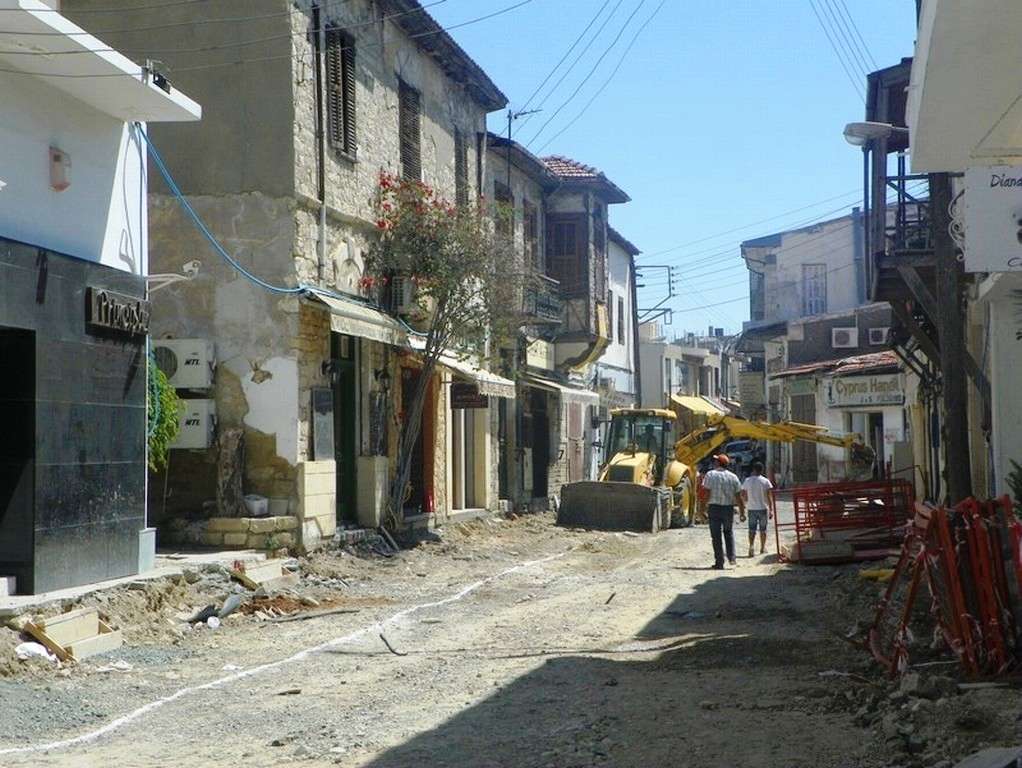 There are very few even relatively old buildings in the city. There are literally a couple of streets lined with buildings from the 19th and early 20th centuries. The photo is almost the only building that attracts attention. 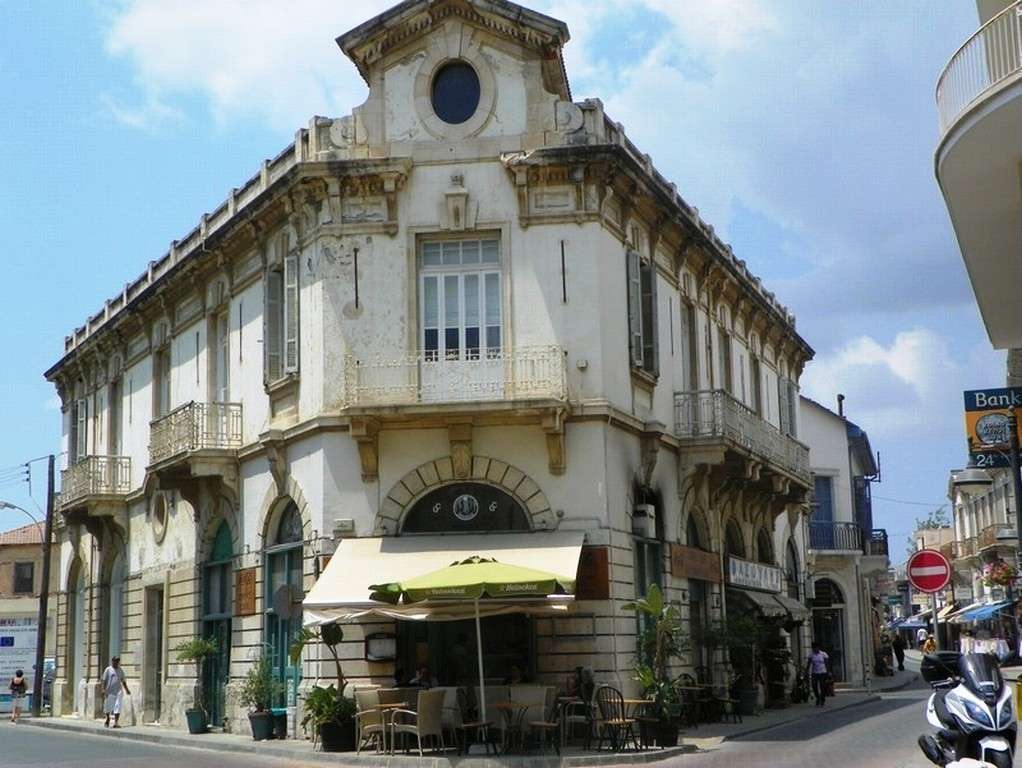 If you walk along the embankment from the port of Limassol towards the resort area, you will find yourself in the sculpture park. 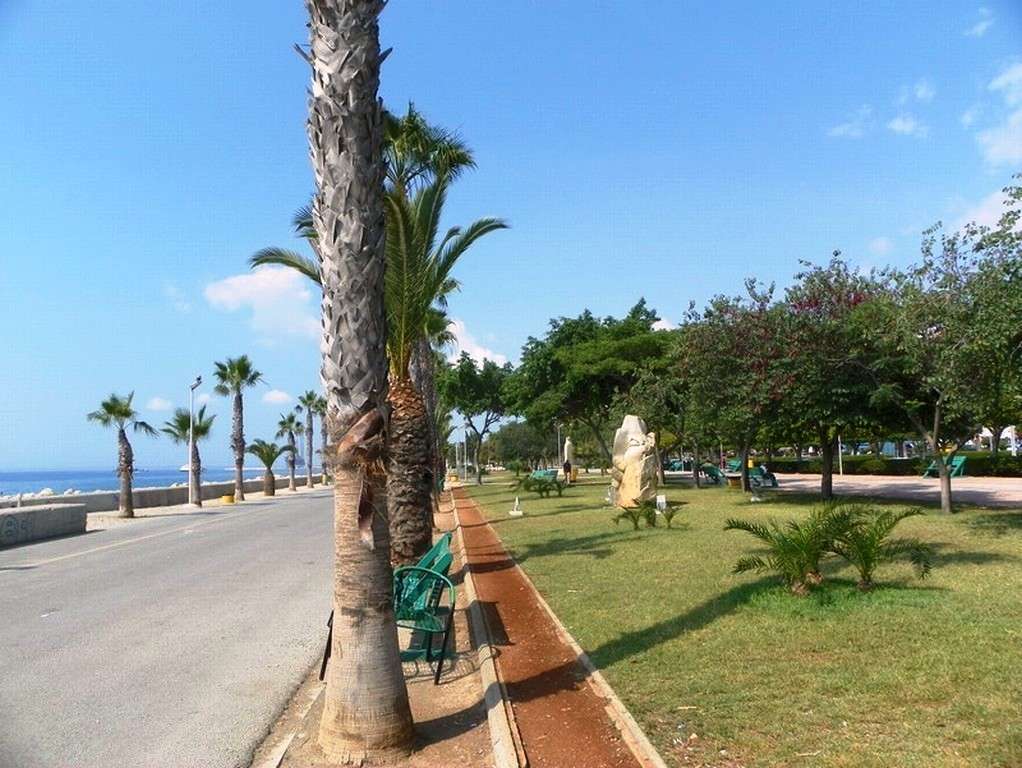 This is an alley containing sculptures, mostly avant-garde. Just a place to walk. Although, if we are talking about walking, the eucalyptus grove, located further along the same embankment, is much more suitable for this. Near the sea, the grove itself is large, shady, there is cool and good air. 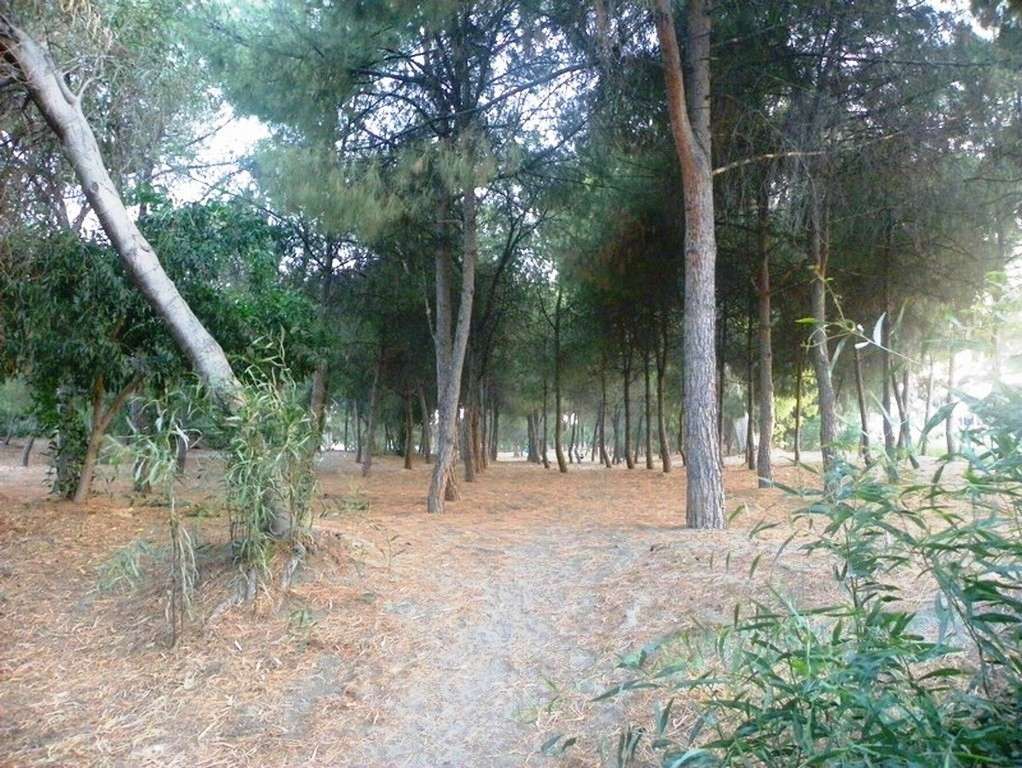 Not far from the alley of sculptures, no longer along the embankment, but in the depths of the city, there is another park - the city one. There are many playgrounds, and the park itself is a small botanical garden. 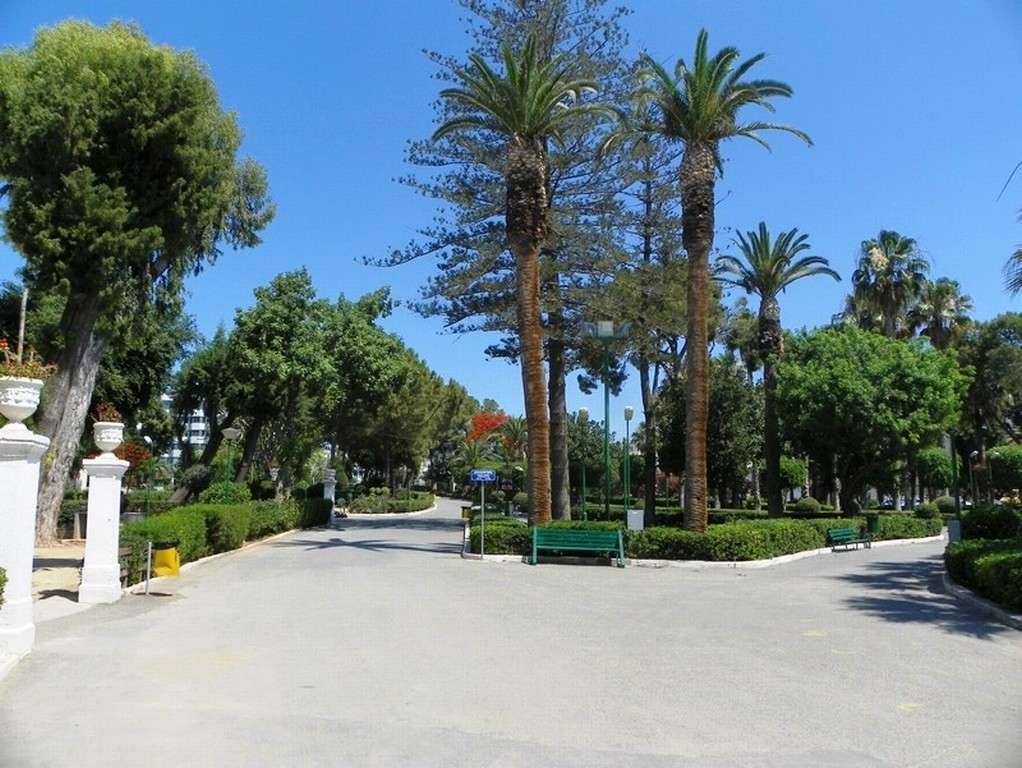 Further, on the other side of the city park, is the city archaeological museum. The museum contains the most valuable exhibits found in the vicinity of Limassol, as a result of excavations. The less valuable ones do not fit into the museum, and they simply lie on the shelves under the awnings, in the courtyard. 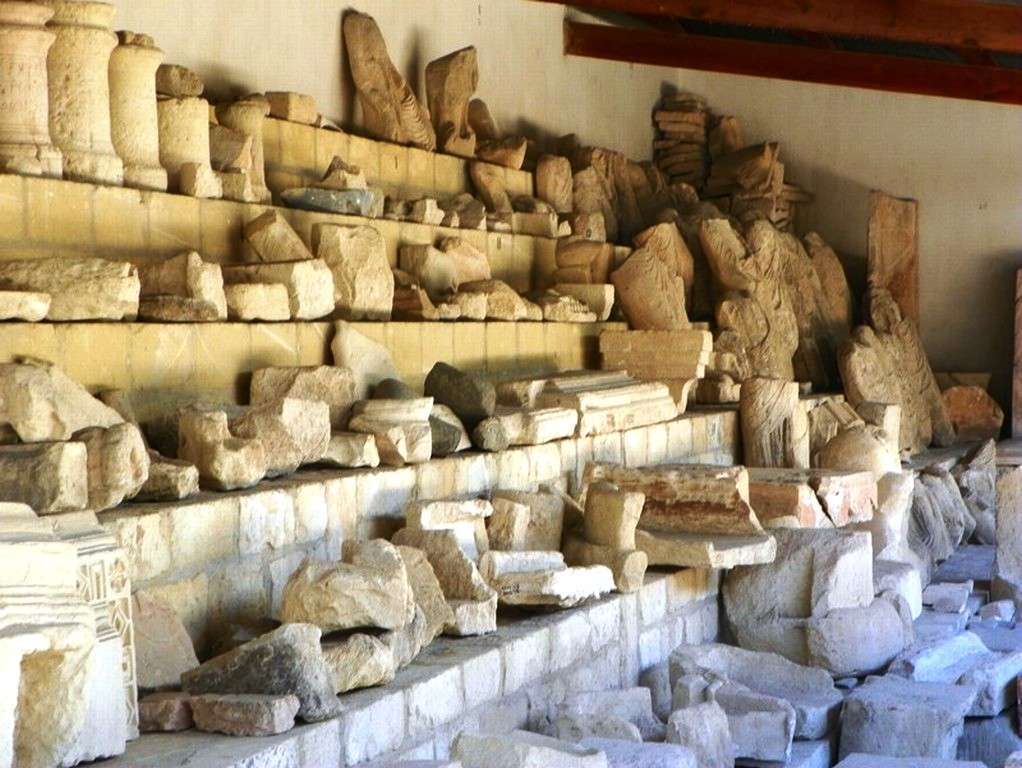 The courtyard of the archaeological museum of Limassol

The resort ends with the ruins of the ancient city of Amathus. 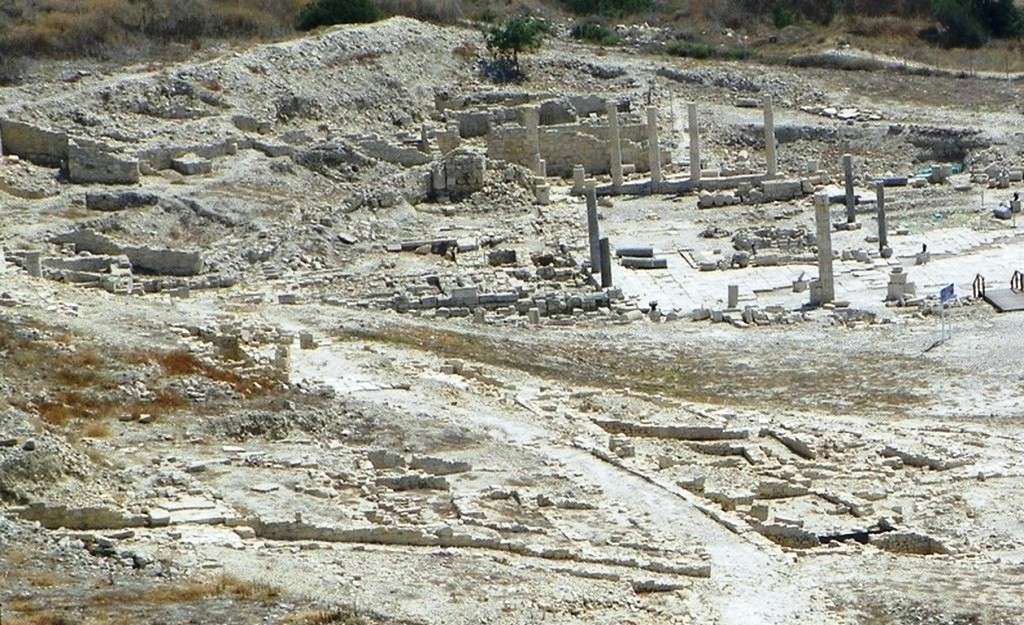 There is some kind of booth at the entrance, but you can pass freely, they don't even take money. It looks like the controls for cars only. Part of the city is below, part on the mountain. Of course, little remained of the buildings, but I did not regret that I went - after all, to inspect the ancient city in a crowd of tourists or alone, in silence - these are two big differences.
There is also a very beautiful view from the mountain, although it is very tiring to climb there in the heat. 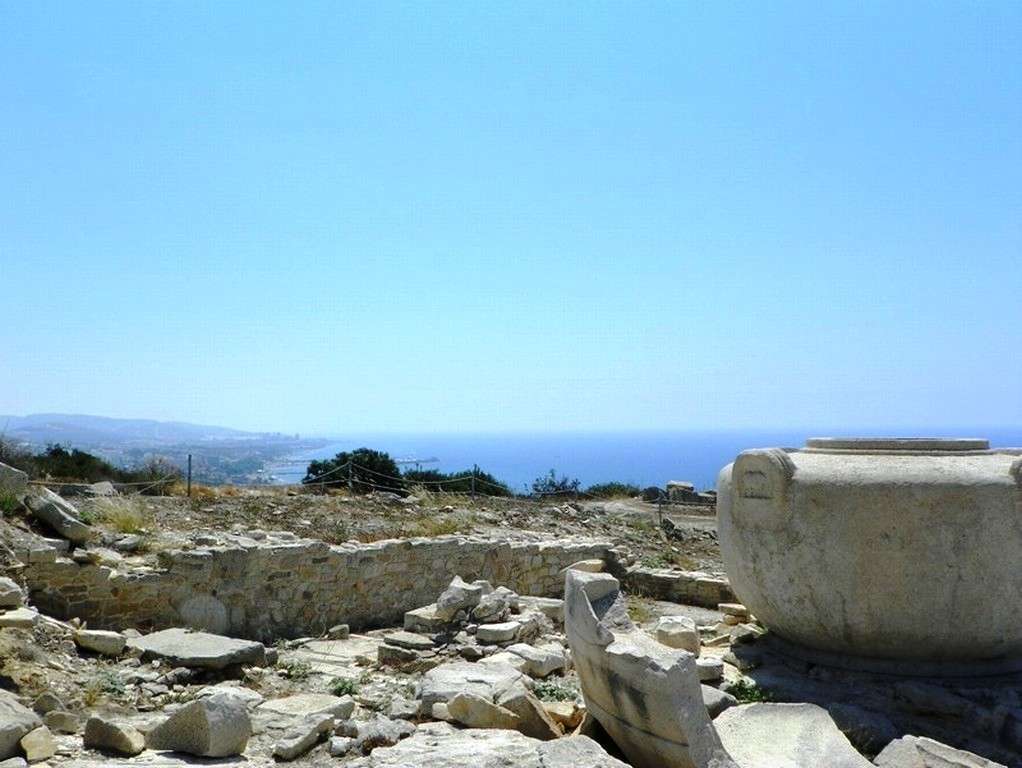 There is a water park not far from Limassol. You can get there by a special bus that stops at the same stops as city transport (you need to sit down at a bus stop in the direction of the center). The bus is not free. The water park is  not cheap, but good. We especially liked the "lazy river" - a canal with an artificial current meandering along the entire water park. It's nice to drift on a rubber boat. Do not forget to smear with anti-sun cream before the rafting - 15 minutes of drift under the daytime Cypriot sun is fraught with burns. 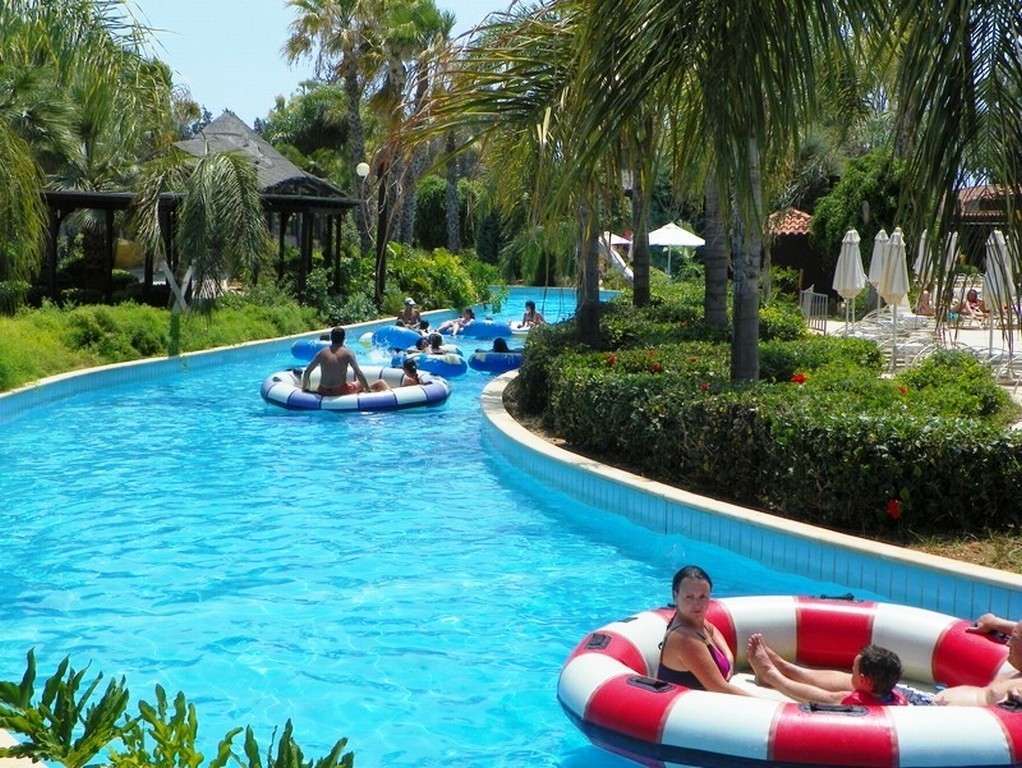 "Lazy river" in the water park

The beaches of Limassol can be said to be empty, just surprisingly. We were in late June - early July, i.e. it seems to be the season, but on the beach closest to us there have never been more than a couple of dozen people. 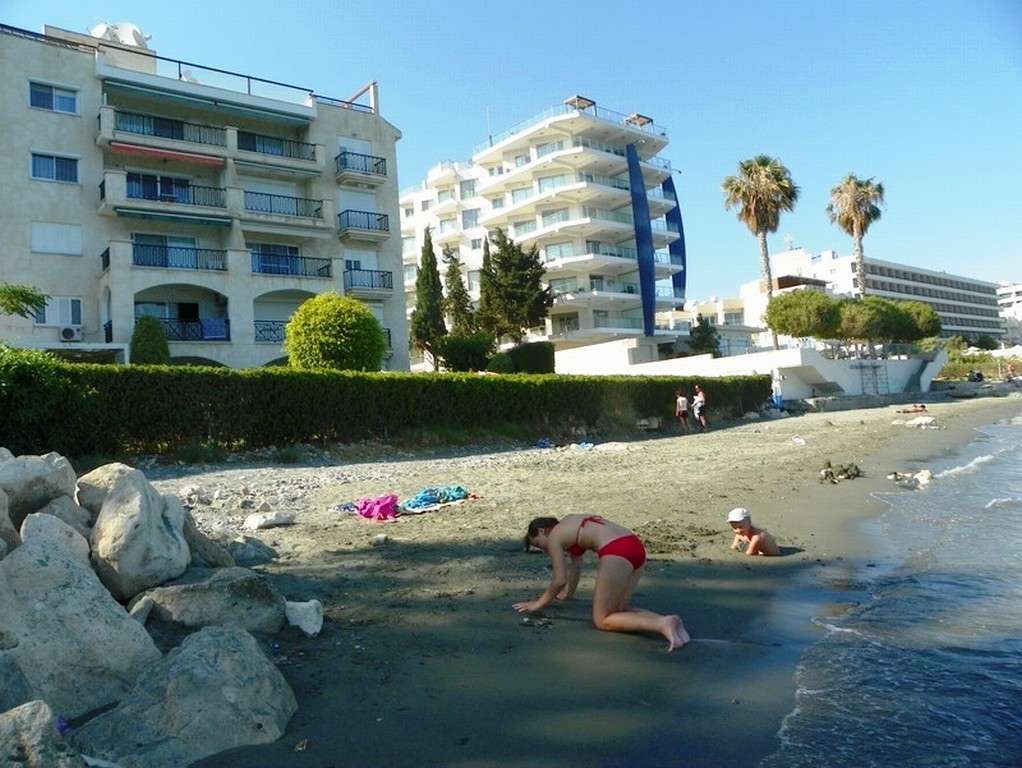 The resort area of Limassol stretches from the city itself, to the east, to the ruins of the ancient city of Amathus - it is about 15 km. Closer to the city center, the beaches are more crowded, quite free.
The beaches of Limassol are either sandy (black volcanic sand) or small pebbles.

Kourion is the remains of an ancient city near Limassol. Of the sights, only the amphitheater is well preserved, the rest, at best, are remnants of walls and floors (in some places mosaic). 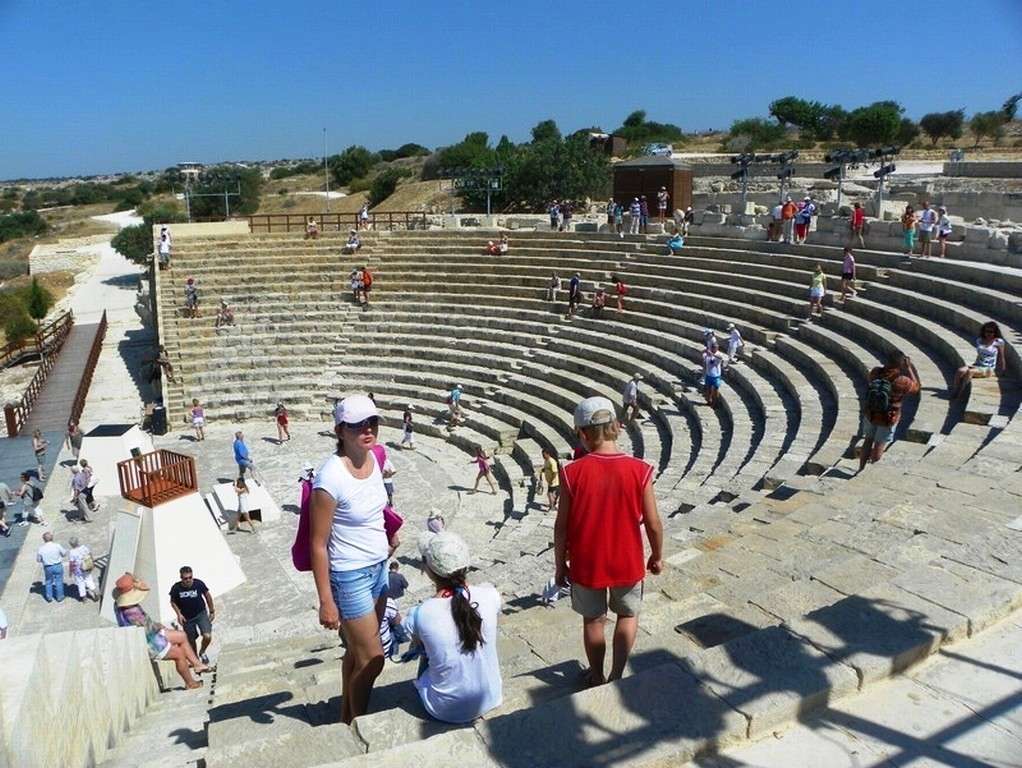 The city was located on a hill with beautiful views of the coast. 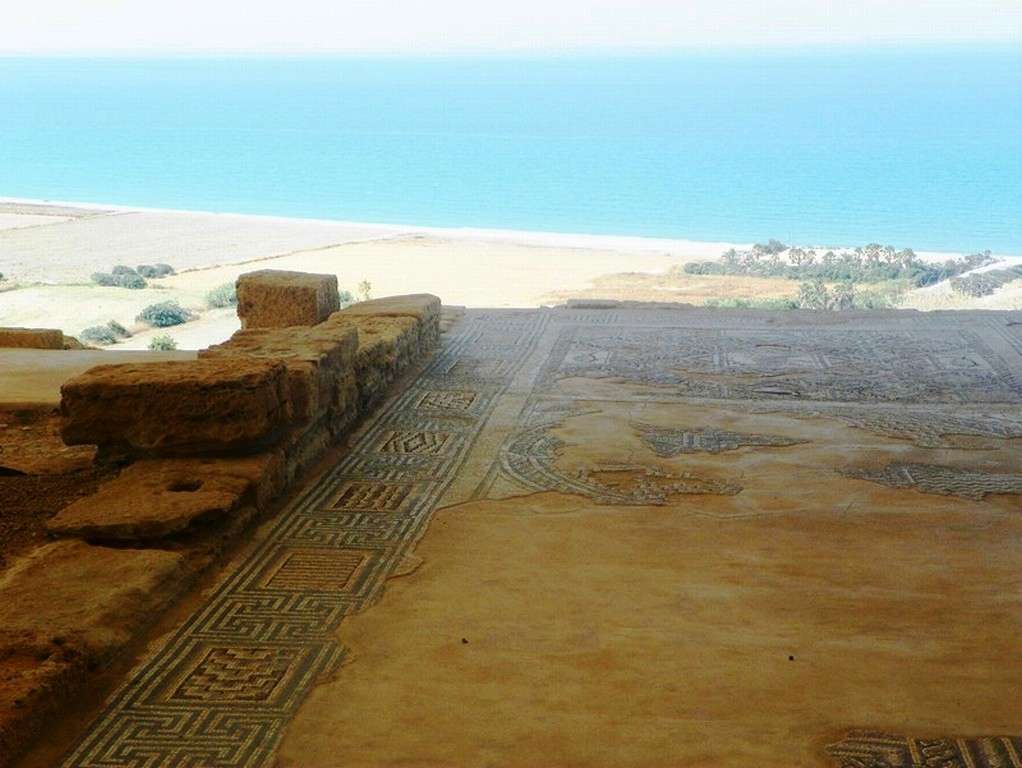 Aphrodite's beach differs from other beaches only in that it is located far from settlements and tourists are taken there on purpose, because, according to legend, it was here that Aphrodite appeared from sea foam. It is not known whether it is true or not, but they did not fail to arrange an attraction for tourists.

There are a lot of interesting things in Paphos. A very large ancient city with well-preserved mosaics. 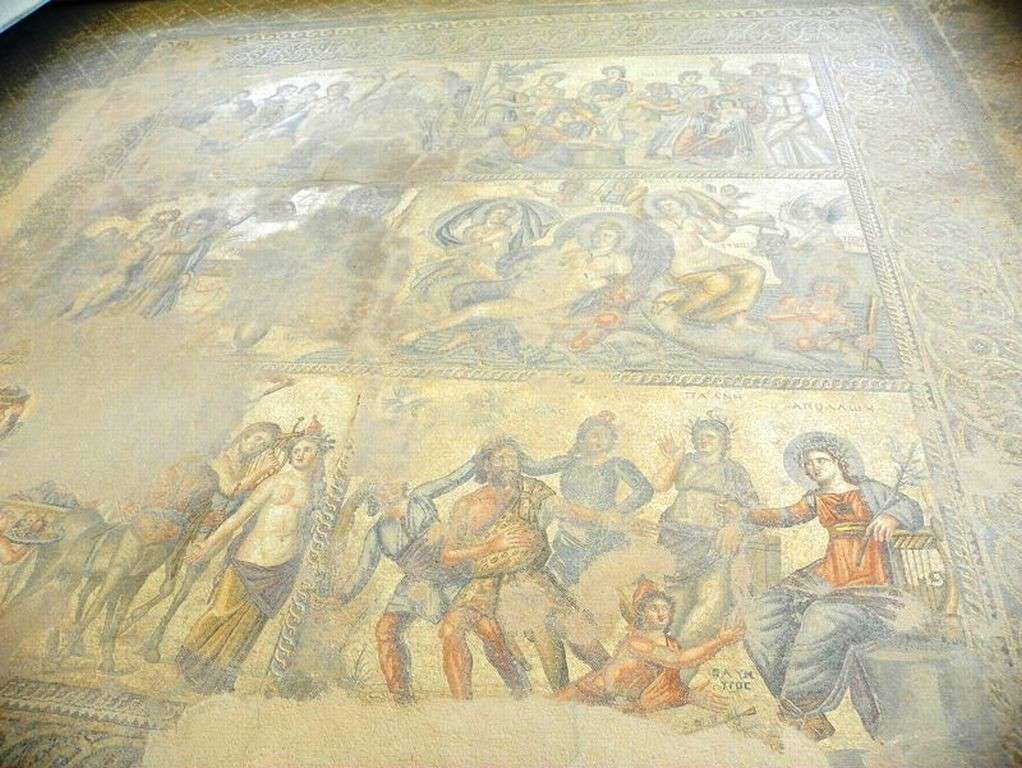 And in general, as in most cities that have existed since antiquity, where you do not dig, you will stumble upon an old building. This is really so - the guide told me that most of the ancient buildings are located under modern city buildings and it is impossible to dig them out for obvious reasons. 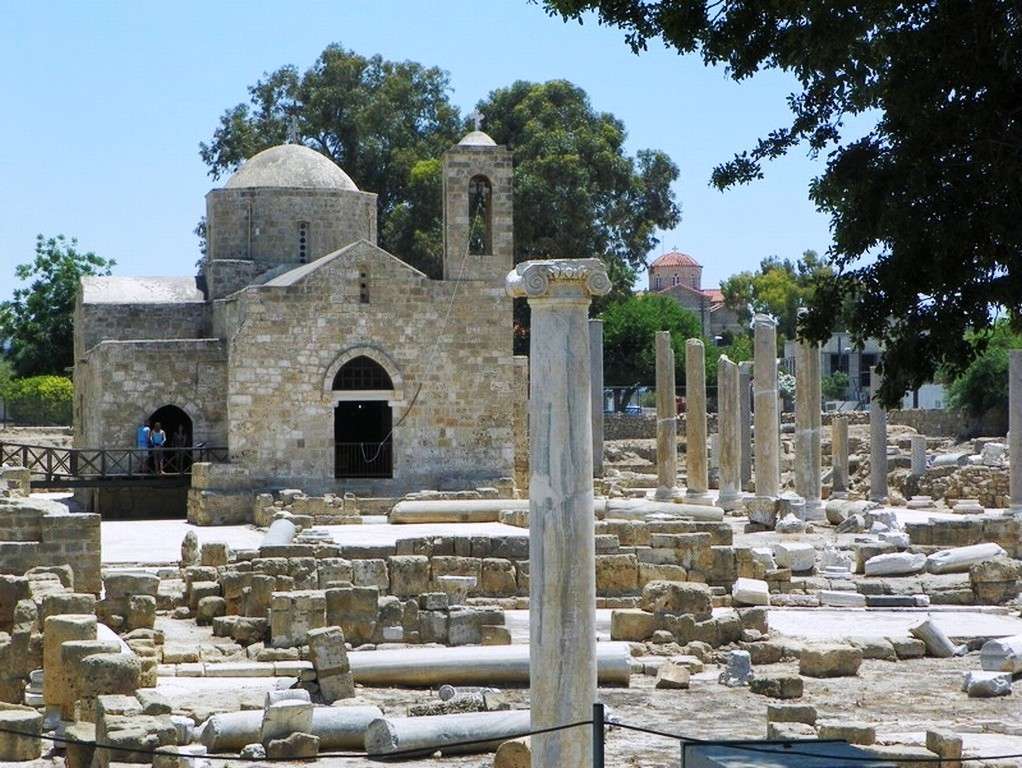 A medieval fort with small museum inside has been preserved at the Paphos harbor. 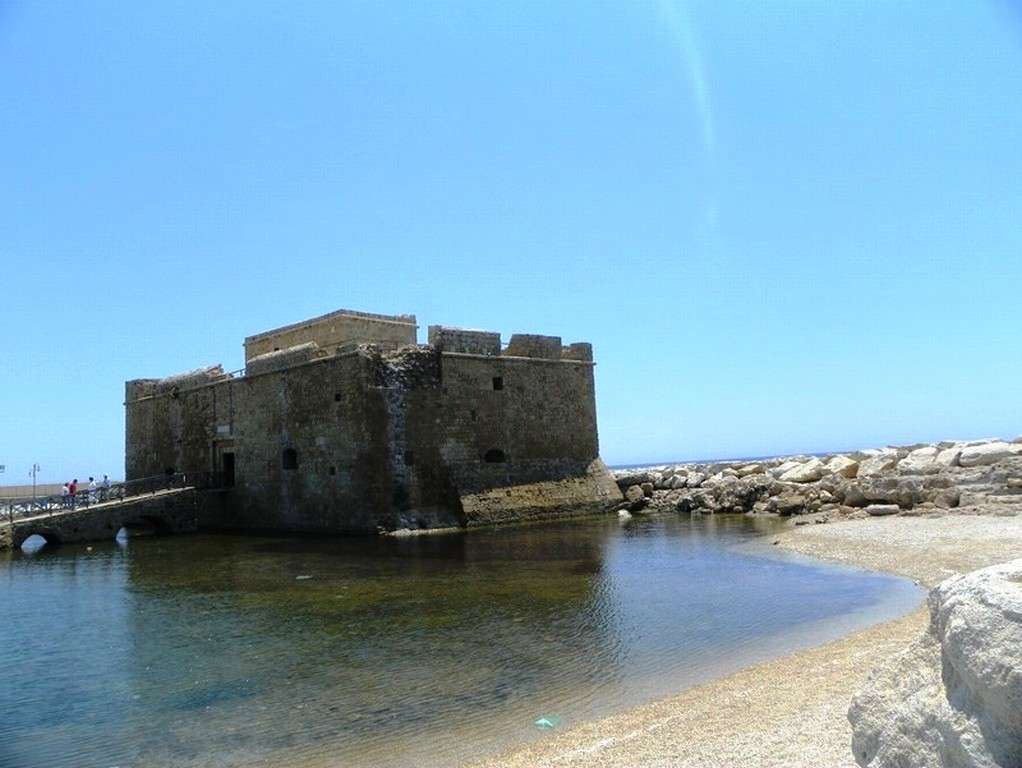 Fort at the pier