Larnaca is a city in Cyprus, located on the Mediterranean coast, in the middle of the southern side of the island. The population is about 50 thousand people. The city is not so small on the territory, but, in principle, you can walk almost everywhere (if you are not afraid of walking for more than half an hour). 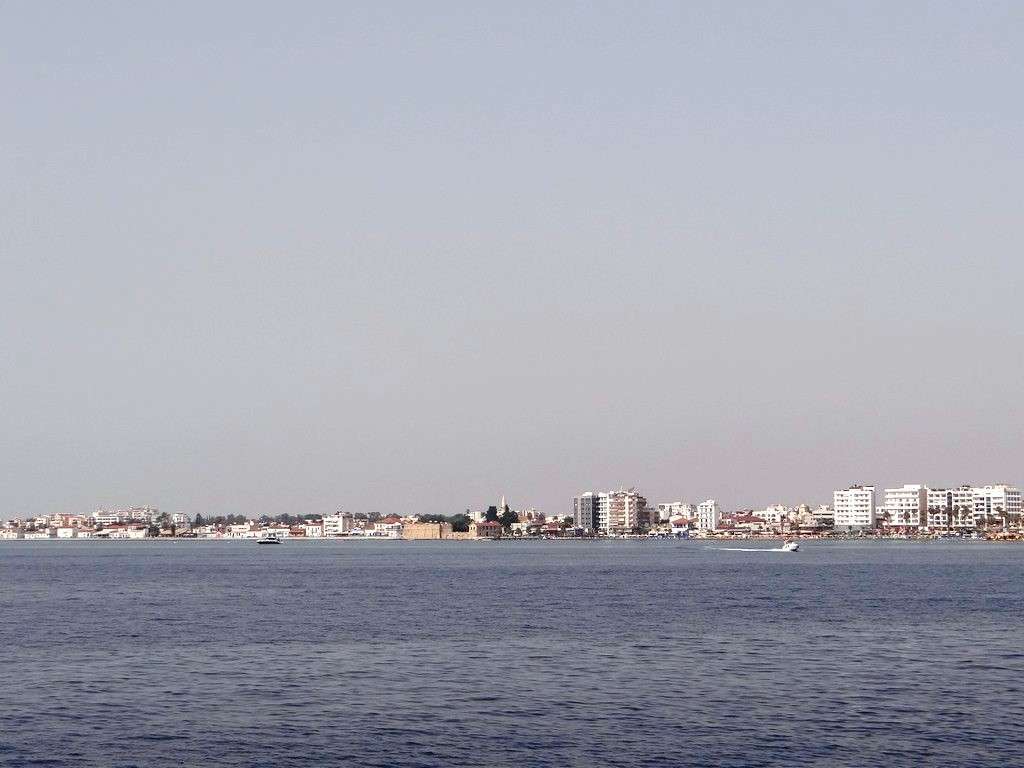 How to get to Larnaca

Larnaca Hermes International Airport is located near the city, or rather, almost on its outskirts. You can get to the center by several buses and minibuses - №407, 417, 418, 419, 425.429, 446, 456. To clarify the schedule of these buses and, in general, information about the bus routes of Larnaca (and not only Larnaca), can be found on the website of the Cyprus Transport.
All routes pass through the central bus station, which is located near the embankment. It takes about 20 minutes to get to it. The cost of a single bus ticket is 1.5 euros. A taxi will cost 20-30 euros.

Larnaca beach, in general, is one, but large and wide, there is enough space for everyone. It stretches from the pier to the fortress (about a kilometer). The beach is sandy, but the sand is not white, but rather the opposite. Well, not black, of course, but grayish, volcanic. Not everyone likes it, although I personally don't care. They say volcanic sand is good for you.
There is a wide promenade along the beach - the Finikoudes promenade. 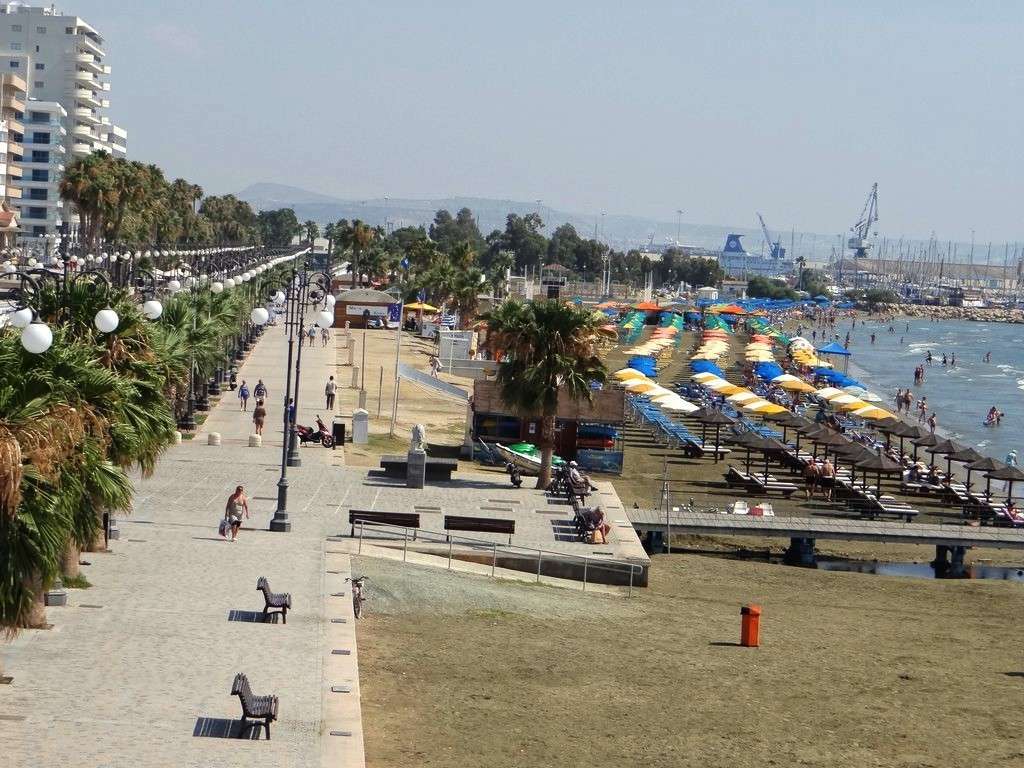 Larnaca. Promenade Finikoudes and the beach

The entire embankment is full of restaurants (with tables on the street, of course). Accordingly, the quiet time of the day for hotels located directly on the embankment is somewhere from 4 to 11 in the morning. That is, if you prefer not to walk at night, but to sleep, then in a hotel on the first line it will be possible only if the sound insulation there is very good.
There is also Mackenzie Beach, which is considered very popular, but it is located closer to the airport, that is, not quite in the city. But there are many hotels. The beach has been awarded the Blue Flag and is known for photographs of low-flying aircraft.

Larnaca, like most Cypriot cities, is located on the site of the ancient city (Kition). There are no buildings left of it. What was found as a result of the excavations is in the archaeological museum of Larnaca. This loud name completely wrongly characterizes the exposition, consisting of one room and some debris in the courtyard. 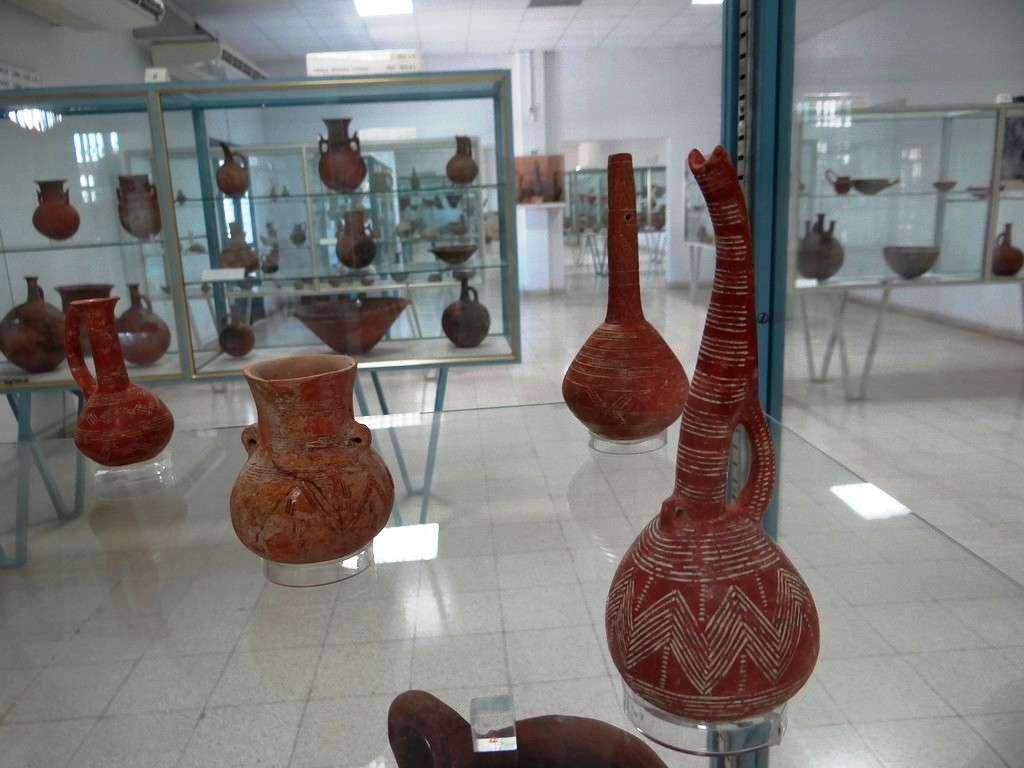 There are interesting jugs, but in order to imagine that this is an archaeological museum of the city - the successor of the ancient Kition, it takes extraordinary imagination.
The excavations of ion itself are also not impressive. You can go there (for money), but I limited myself to a look from behind the fence. I don't think I lost much. 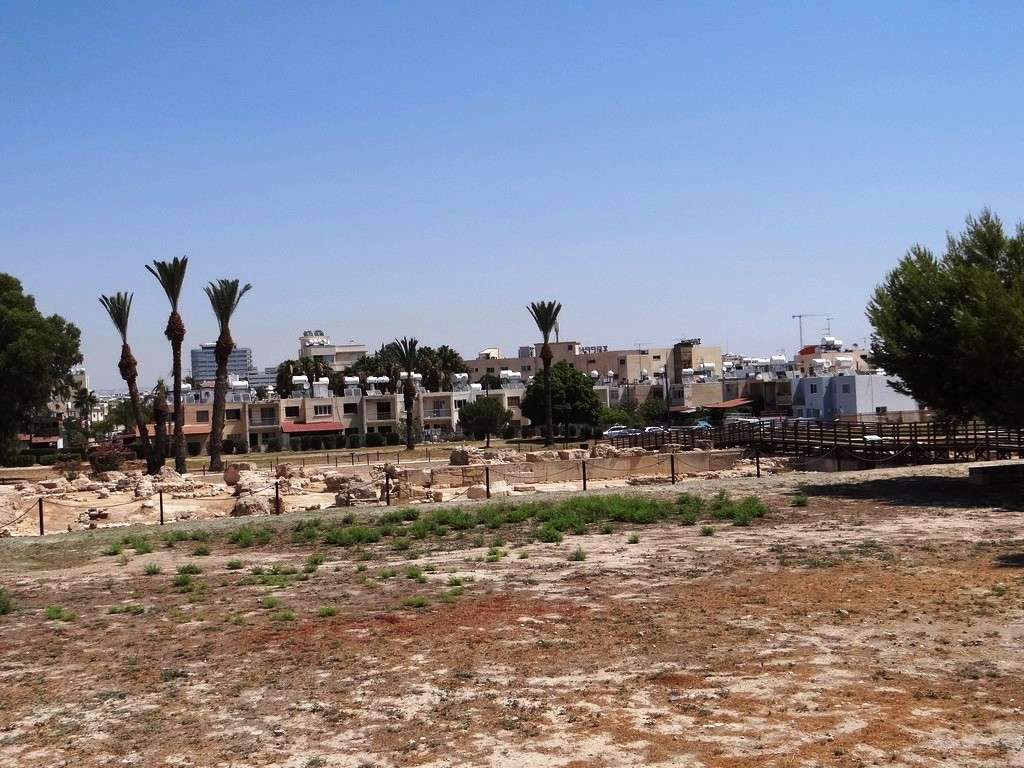 From the Larnaca fortress, which was erected by the French in the XIV century, now almost nothing remains. What we see was built by the Turks in the 17th century and rebuilt by the British in the XIX. 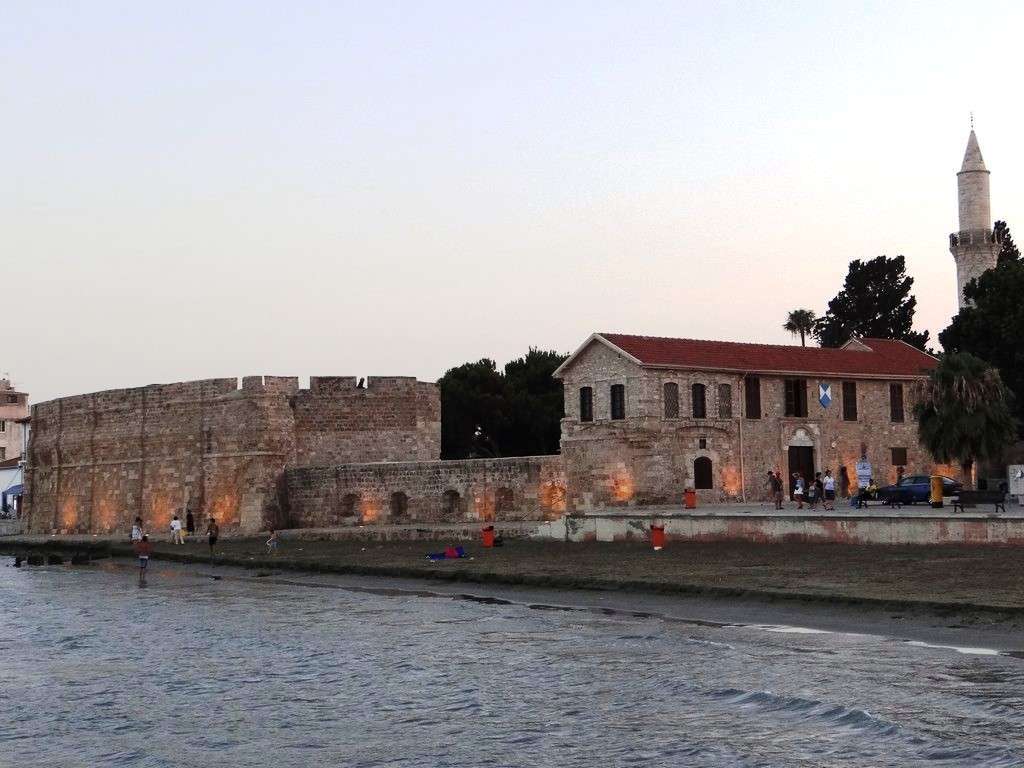 The British used the Larnaca fortress as a prison - a room has been preserved where they carried out death sentences (hanged, to put it simply). They are allowed inside for little money. There is nothing particularly interesting there - cannons and old Turkish tombstones in the courtyard, a small exposition illustrating the history of the fortress, the same room of the gallows and the observation deck above.
Next to the fortress there is the active Jami Kebir mosque, rebuilt from the Catholic Church of the 16th century. 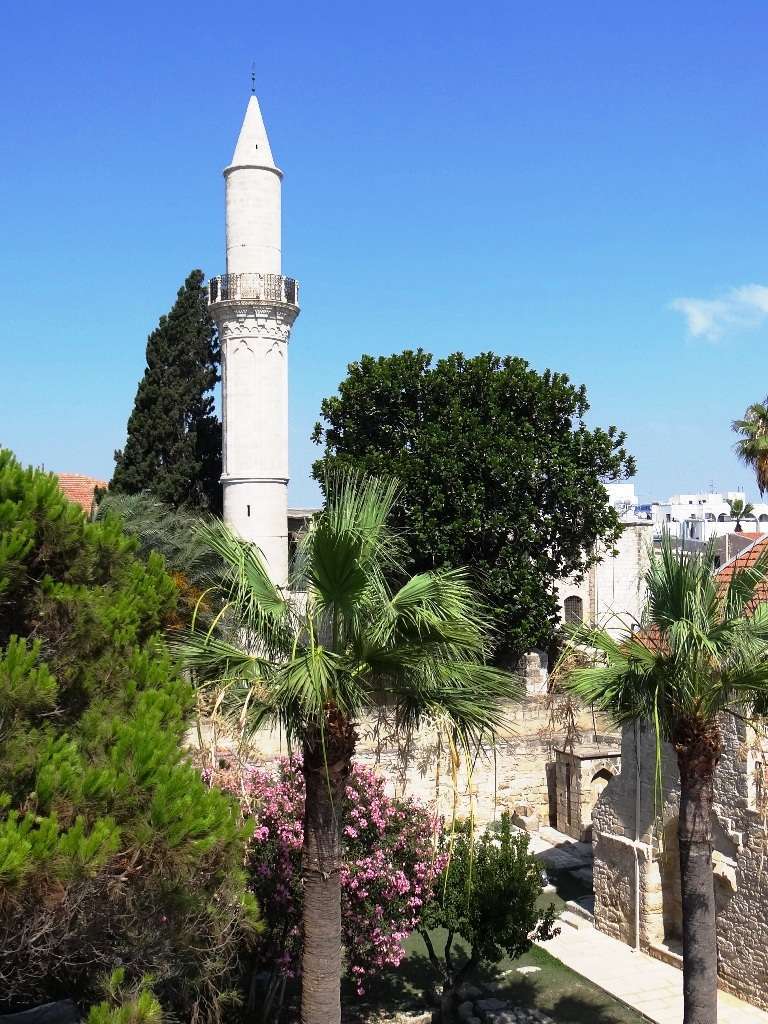 Behind the fort, the zone of active tourist life ends and begins, as it were, the old city. In fact, it is difficult to say how old it is, most likely well restored. But it looks nice, especially in contrast to the noisy Finikoudes promenade. There is no beach here, just a concrete embankment, so there are very few tourists 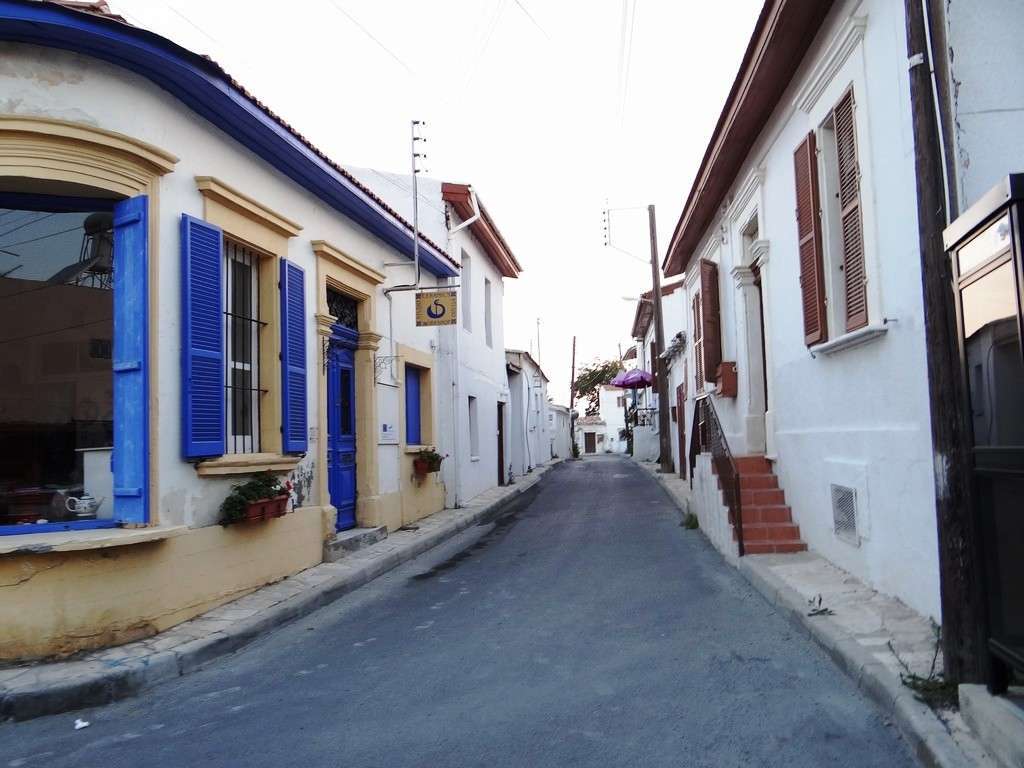 The main attraction of Larnaca is the Church of St. Lazarus. 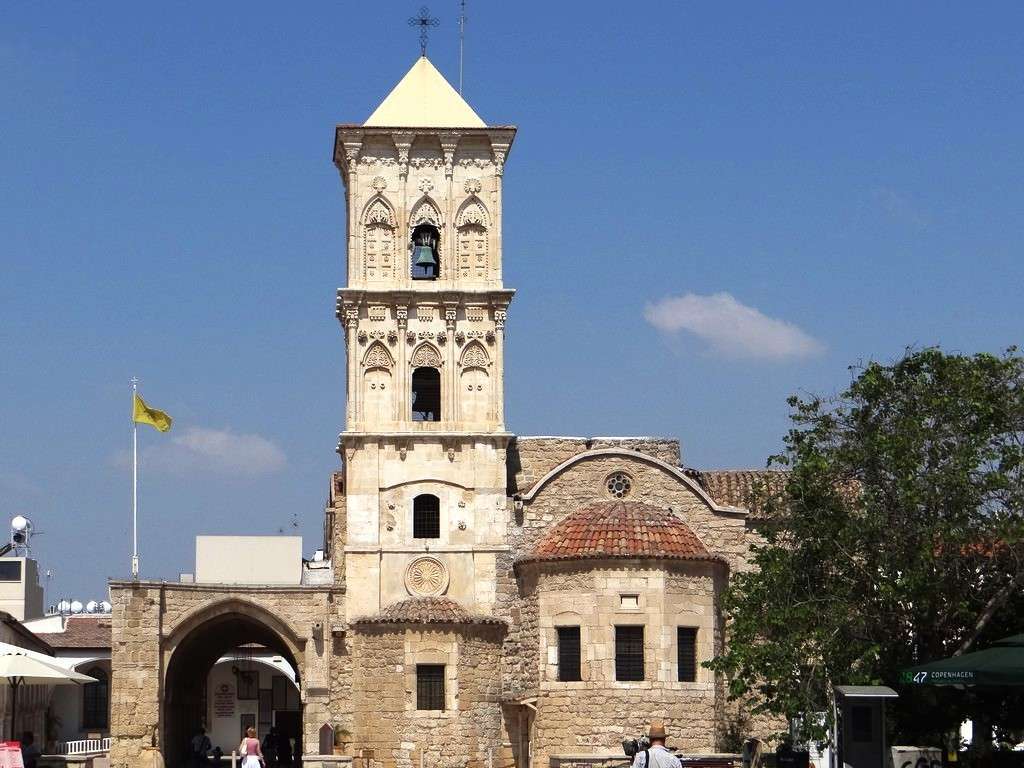 A church was built in honor of the very Lazarus who was resurrected by Christ. He (Lazarus, not Christ :), according to legend, was the first bishop of Kition. In the XVI century the Turks converted the church into a mosque. The bell tower and part of the domes were destroyed and restored only in the 19th century.
Nearby there is a museum exhibiting mainly church utensils and icons. The entrance fee is small, and many of the icons are quite old. It is especially interesting to look at the samples of Byzantine art. 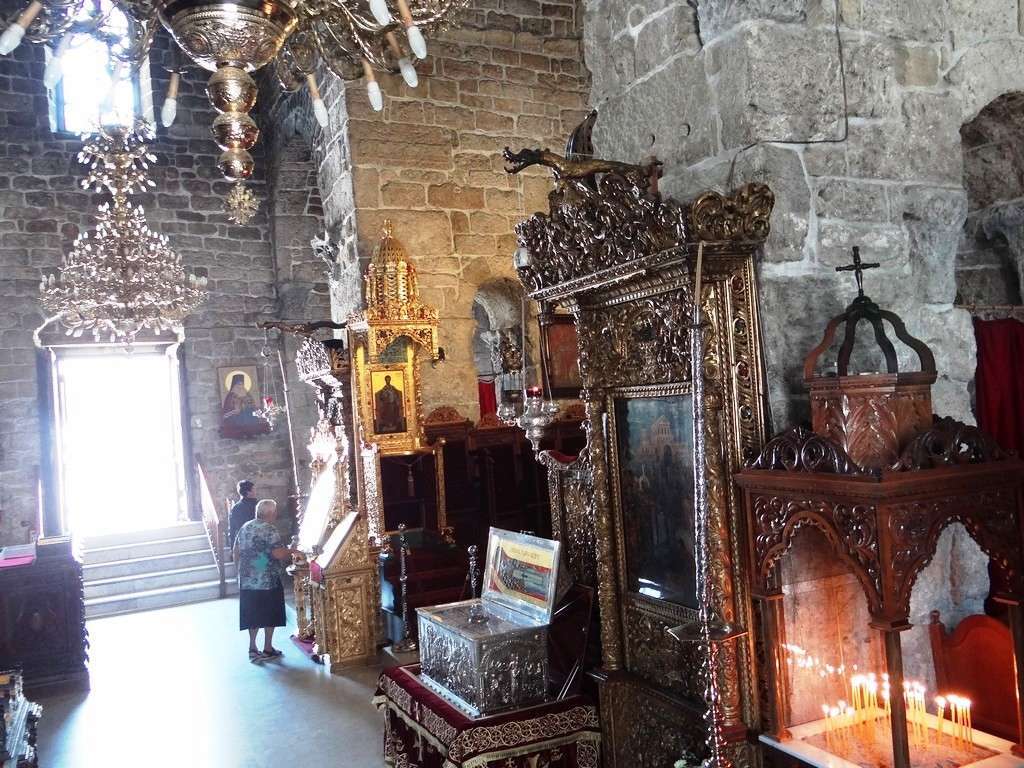 Perhaps the second most important attraction in Larnaca is the salt lake and the mosque located on its shore. A lake in summer is not a lake at all, but just a plateau covered with a layer of salt. 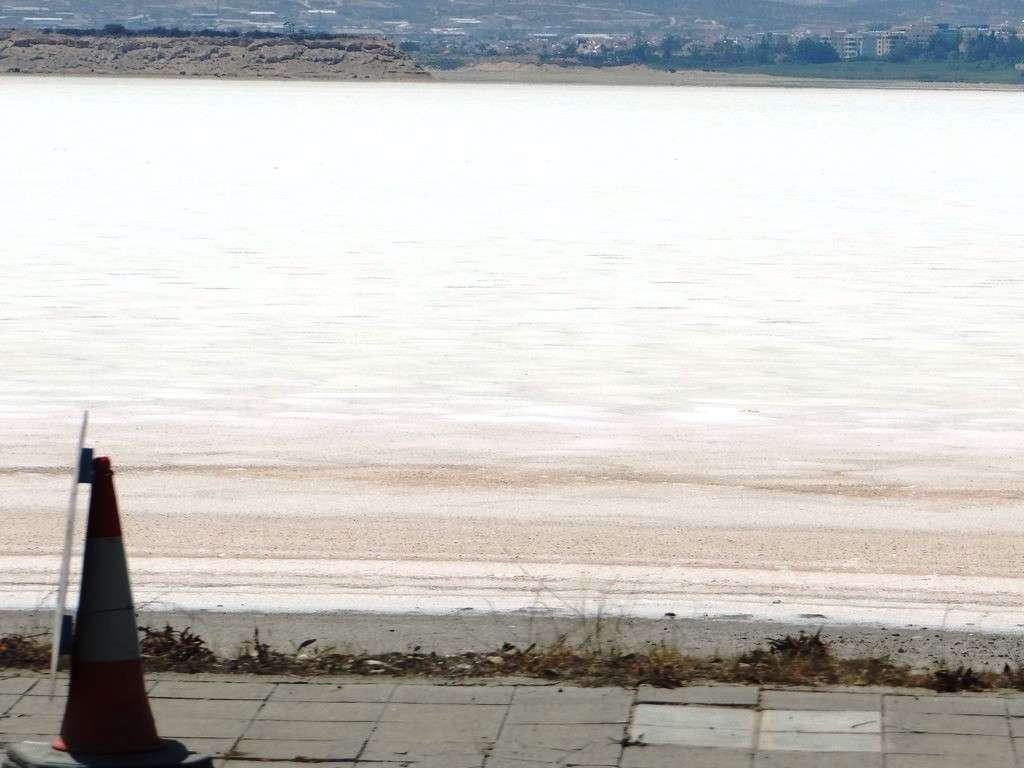 The Hala Sultan Tekke Mosque is one of the most important shrines of Islam, since according to legend it was built on the burial place of the Prophet's aunt. I am not very interested in Muslim religious buildings, besides, the mosque was built relatively recently - in the 17th-19th centuries.

Much more interesting is another Turkish building - the Larnaca aqueduct. It was built by one of the rulers of the city to deliver water to the inhabitants, of course. The structure impresses with its size. There are no fences or other obstacles, you can climb in and see how everything works. 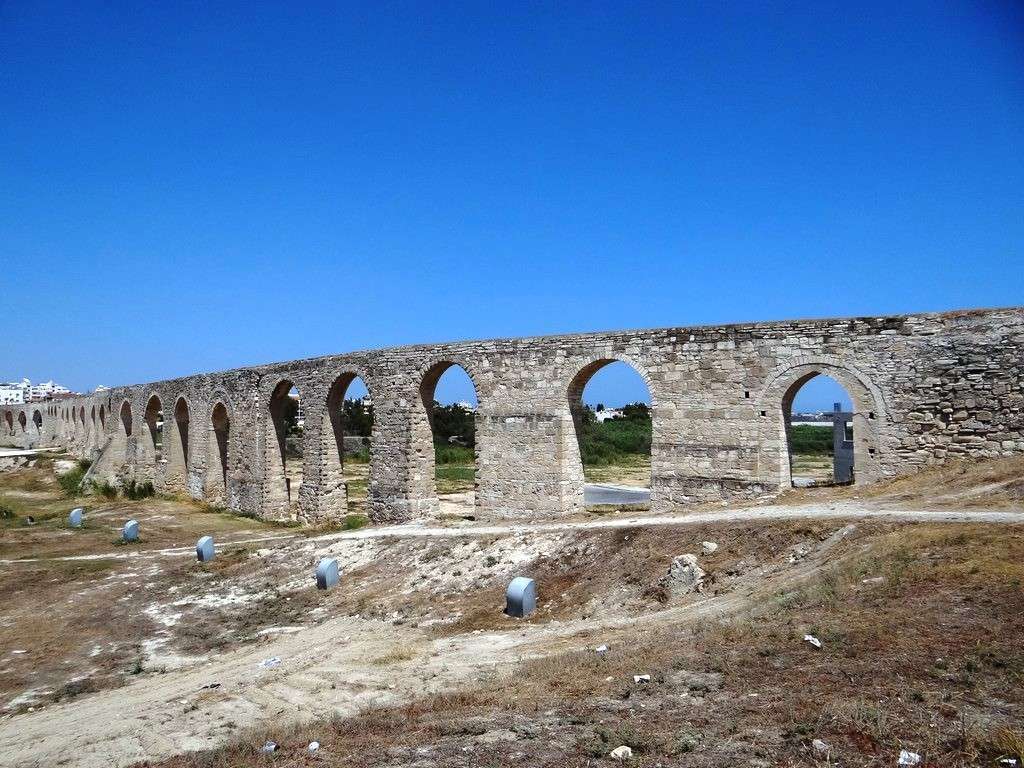 Convent of St. Joseph was founded relatively recently. The buildings were built according to the canons of classical Latin architecture, so you cannot immediately say that this is the 19th century. 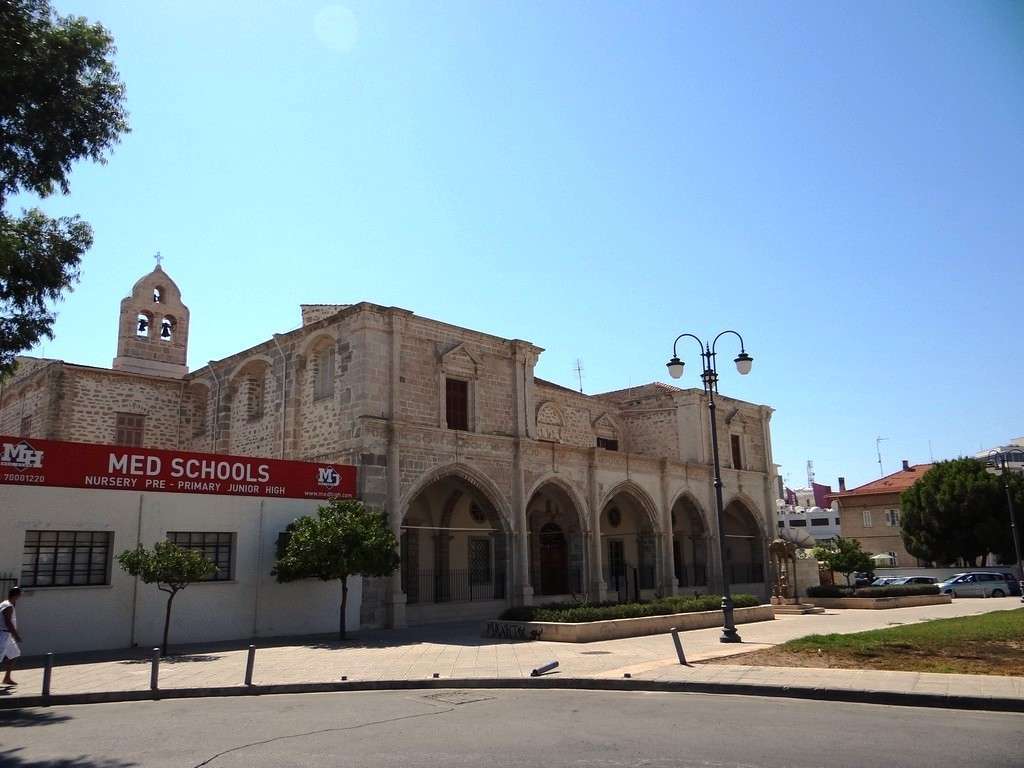 The church of Christopolitissa looks interesting, but you can't get inside the fence - it's closed. Its modern appearance is the result of the restructuring of the 18th-19th centuries. The bell tower even shows how much newer it is than everything else. 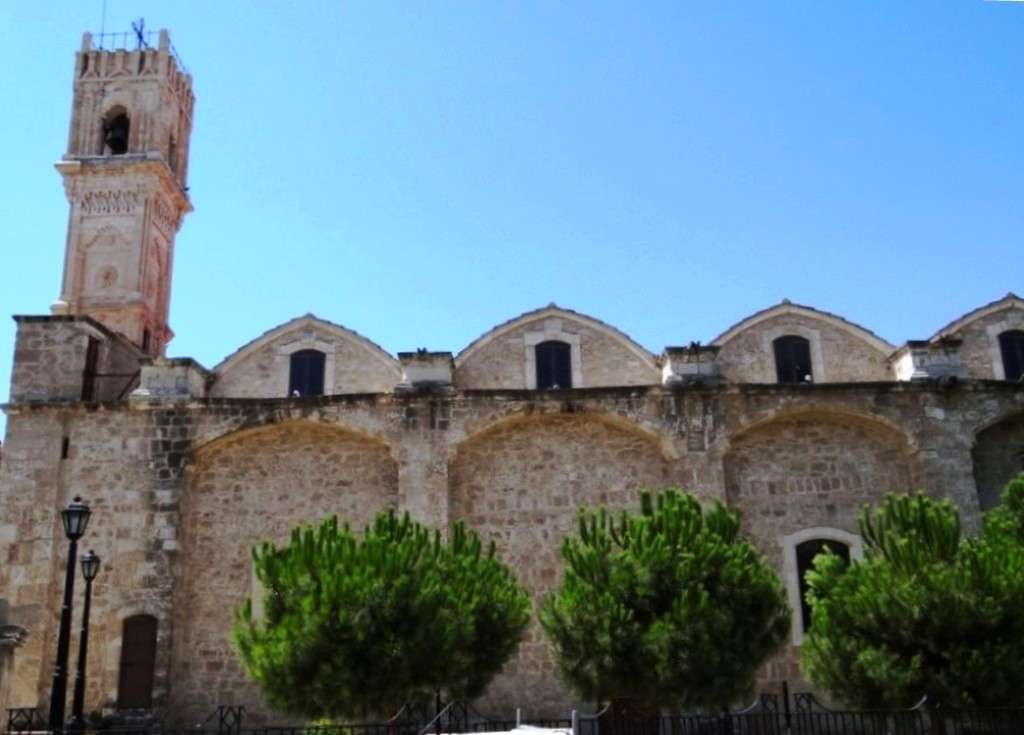 The Cathedral of the Holy Transfiguration of the Savior (Chrysosotiros) is the center of the local metropolis, which it became after Metropolitan Macarius I (1737-1776) moved to Larnaca. What can be seen now is mainly the result of the 19th century restoration. 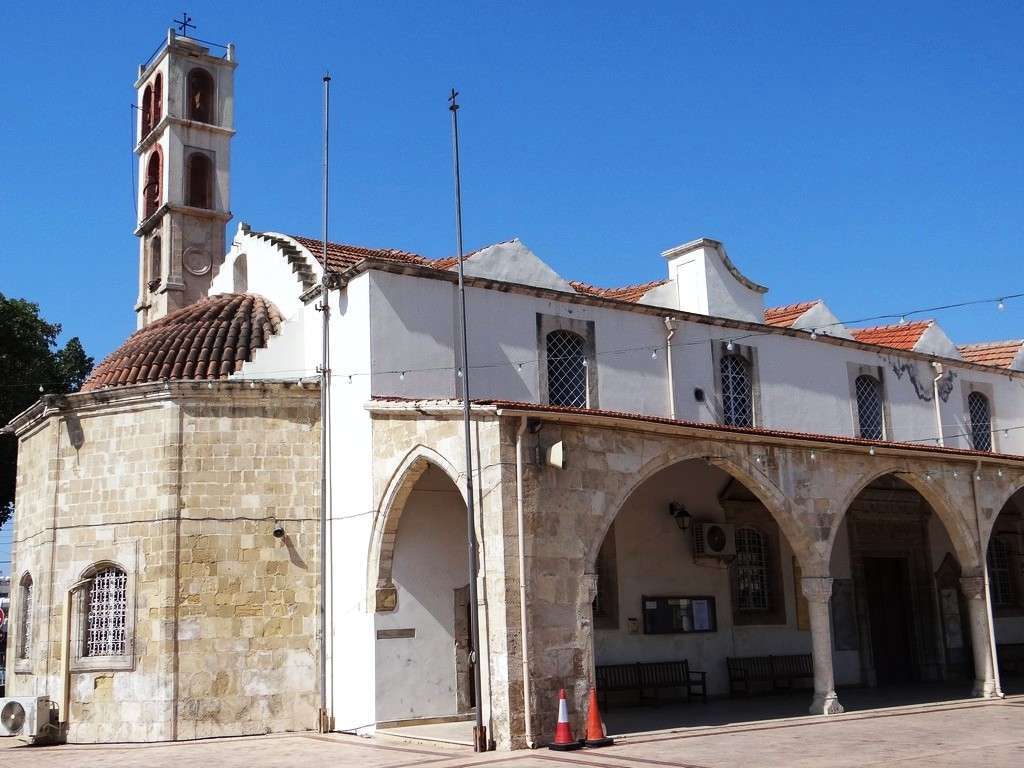 Cathedral of the Holy Transfiguration of the Savior (XV century)

The Tuzla Mosque is one of the oldest buildings in the city. Initially (6th century) it was the Byzantine Church of St. George. After the arrival of the Latins, it was transformed into the Catholic Church of the Holy Cross, and after the Turkish conquest in the 16th century - to the mosque.
They write that the frescoes of the very first church have been preserved inside, but it is impossible to go there - everything is closed. 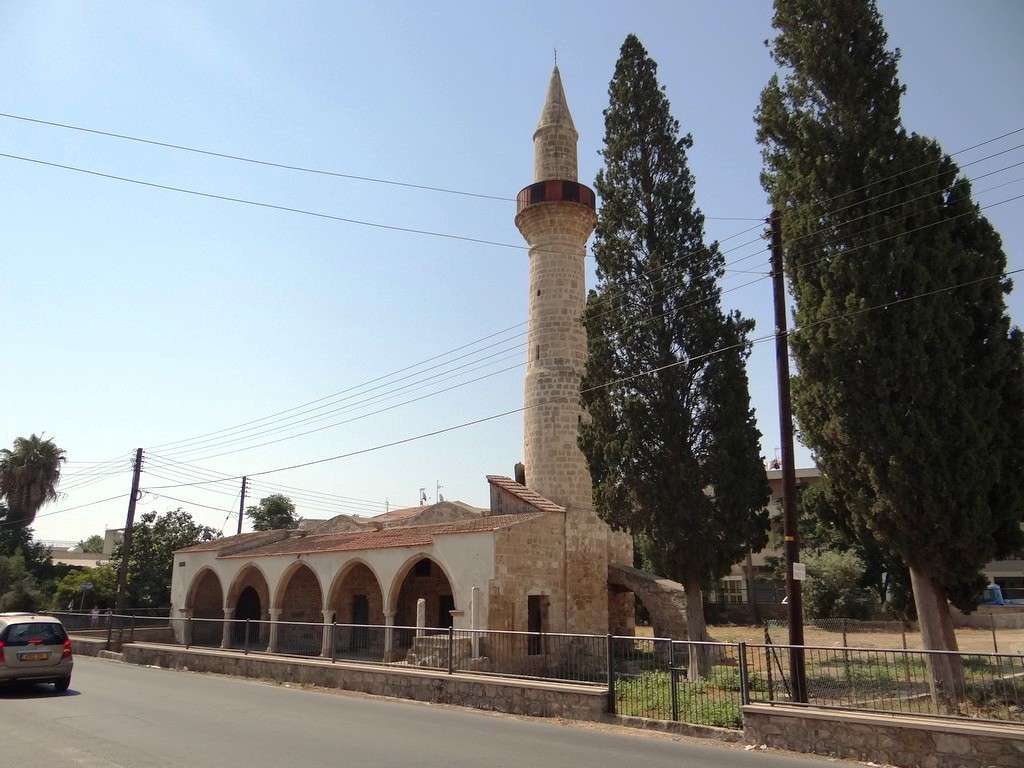 The only surviving Venetian fountain is located opposite the mosque. Once they were scattered throughout the city. In fact, this is not a fountain, as we now perceive it, but just a spring from which the locals took water. 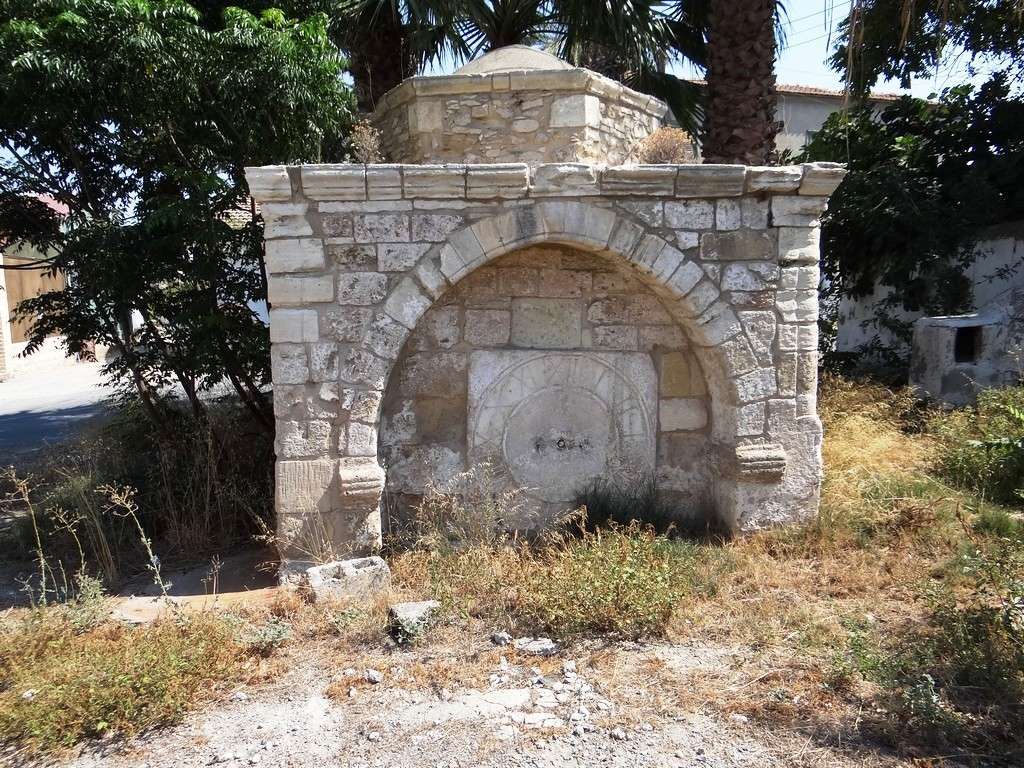 Chapel of St. George Makris is one of the few surviving examples of Byzantine architecture. Previously, there was the village of Agrinu, the center of which was the church. In the XV century the chapel was destroyed by the troops of the Egyptian sultan and was rebuilt in the same form. In the XVIII-XIX centuries a monastery was formed around the church, which fell into decay and was demolished in the 20th century. So now this place looks almost the same as in the Middle Ages. Very quiet and peaceful place on the outskirts of the city. Unfortunately, like most of the Cypriot churches, the chapel is open only for the duration of the service, so it was not possible to see it inside. 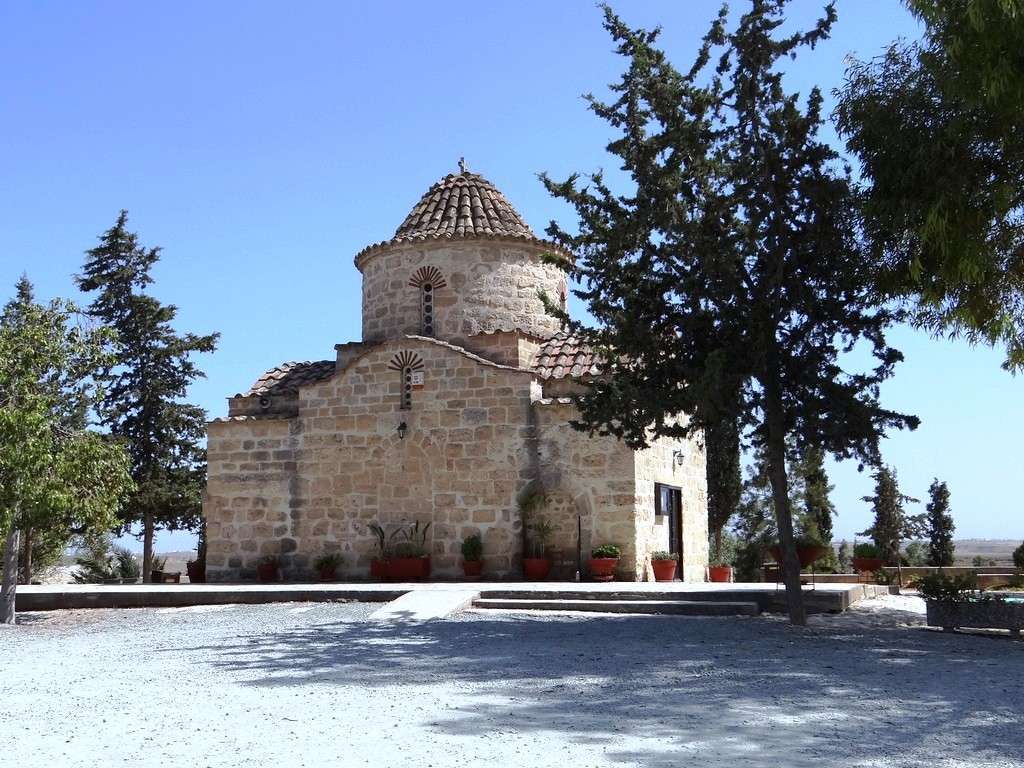 From Larnaca about half an hour drive to the village of Kiti, where the beautiful Byzantine church Angeloktisti is located. Even taking into account all the bus adventures, I never regretted that I went. 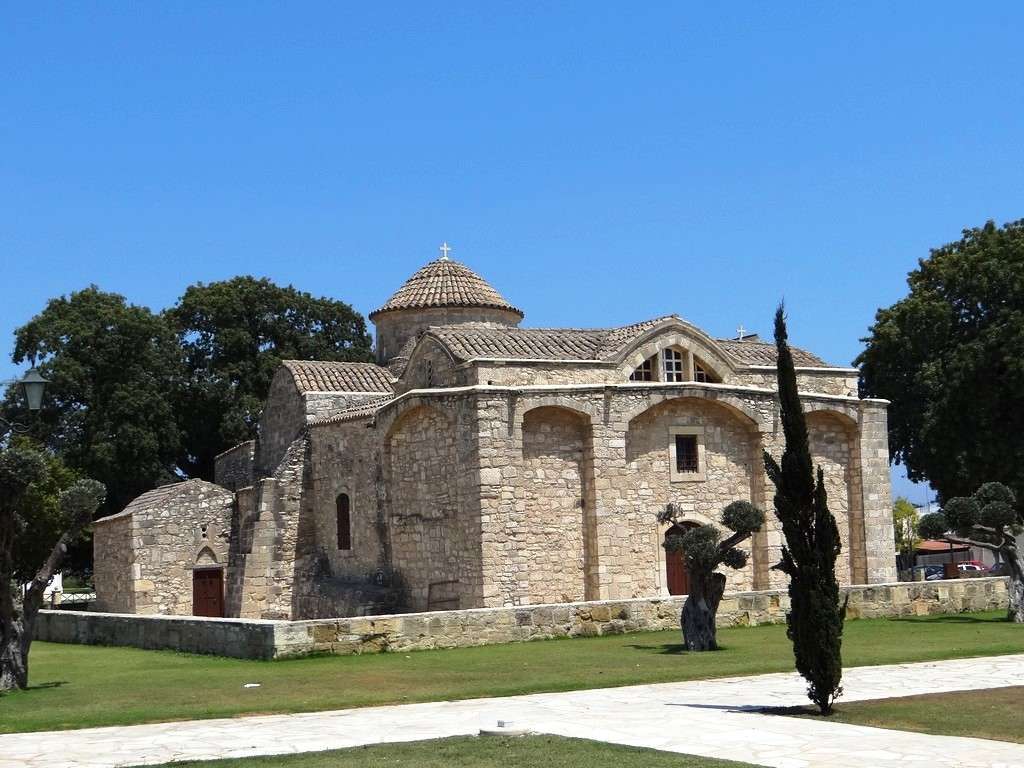 Church of Our Lady of the Angel (Angeloktisti) (XI-XV centuries)

Tourists, as a rule, do not get here, but in vain. It is here that you understand what the churches of medieval Cyprus were like. This is much more interesting than the pretentious cathedrals cluttered with golden utensils.
The church began to be built back in the 5th century, but now this early building is completely hidden by the later layers. The main part is Byzantine, XI century, the chapel was added by the French in the XII century. Church of Our Lady of the Angel (Angeloktisti) (XI-XV centuries)

Not far from Larnaca there is a water park, you can get there by bus. In my opinion, it is worse than the Limassol one, but, in principle, not bad.

We took an excursion on a boat with fishing and a visit to the site of the sunken ferry "Zenobia". You can to buy tickets on Larnaca marina
All this happened not very far from the city coast.
For fishing, those who wished were given fishing rods of the type of spinning rods with three hooks. They had to be thrown down from the side and then pulled out. There were a lot of people, biting, as they said, is much better, but, in general, there were few of those who did not catch anything at all. Small fish such as perches were caught and, someone was lucky to pull out octopuses. From all this (not only from this, of course, otherwise everyone would have remained hungry) then they made dinner. 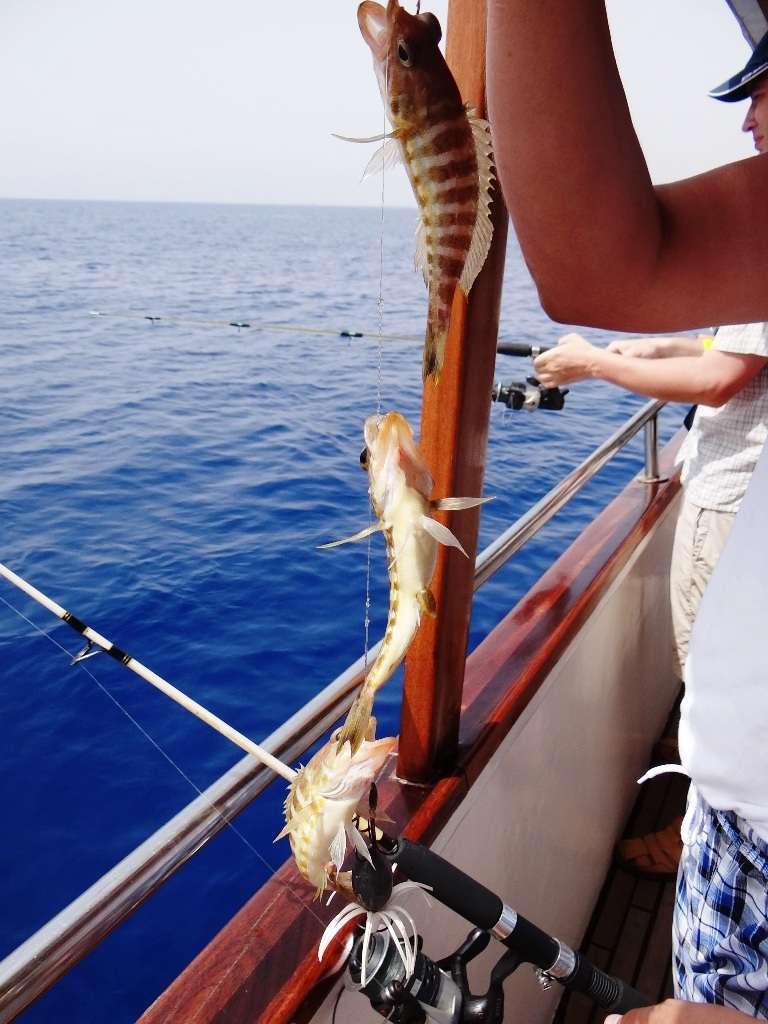 At the crash site of "Zenobia" it was possible to swim in a mask (they were given out on bail) and life jackets, who need it. It can be seen quite well, although at such a depth you will not see anything special - only the skeleton and scuba divers :) In principle, I liked the excursion, it was interesting.

From Larnaca you can go to Nicosia, rich in sights. By bus it takes about an hour.
The tour desk sells a variety of excursions. I traveled around North Cyprus.

In total, I liked the rest in Larnaca. The beach is good, there are many interesting things in and around the city. But you still need to live away from the embankment - it's very noisy.